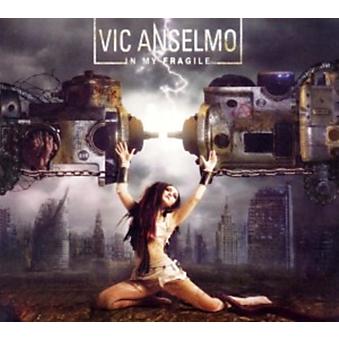 Two years ago I had the privilege to interview an upcoming star on the gothfront, a woman named Vic Anselmo.
Apart from the fact that she has an obsession with Pantera (hence the name Phil Anselmo) I failed in describing her music and Vic convinced me that there was nothing to worry about, simply as there are not that many people around who are able of doing so.

Girls are growing up and back then she was an interesting newcomer from Lithuania but in the meantime she moved to Germany, not in the least because she can count on the carrying hands from Danse Macabre and so it's no wonder that Vic covers "Das Dunkle Land" from Das Ich on her new album.

It seems like the German air did Vic more than good as her newest album is an enormous step forward as well.
There's not only the stunning booklet in where Vic invites you to her own world but the music itself has become more mature as well, which adds to her own sound.

Of course her voice will always be similar to the one from Julianne Regan (if that's not a compliment then we don't know what a compliment is!) and her imaginative style will forever remind us of Kate Bush but still this is an album from an artist who is slowly growing to become an icon herself.

Even more, due to the label and the image, she'll be categorised as "goth" but anyone who cares about music rather than styles will see this woman is in the same league as say Regina Spektor.

As a bonus you'll get four acoustic livetracks which were taken from her current tour with Deine Lakaien.

Same combination of genres: DARK POP + GOTHIC
LEBANON HANOVER • Tomb For Two
FLESH & FELL •
THE BEAUTY OF GEMINA • The Myrrh Sessions
RED TEMPLE SPIRITS • Dancing to restore an eclipsed moon/ If tomorrow I were leaving for Lhasa, I wouldn't stay a minute more...
BLACK ICE • Before the first light
EXIT TO EDEN • From The Other Side
THE WOLF GANG • First Blood EP
LIFE IN SODOM • The Hollow and Haunted House EP
DEAD GUITARS • Stranger

Same genre: GOTHIC
THIS VALE OF TEARS • This Vale Of Tears
KILL SHELTER • Asylum
THE BIRTHDAY MASSACRE • Fascination
TWO WITCHES • The Undead
DARK • Nightmare
ANTHONY JONES • Farewell To Flesh
JESU • When I Was Small
DAVID J HASKINS • Missive To An Angel From The Halls Of Infamy And Allure
THE SISTERS OF MERCY • First And Last And Always
ALIEN VAMPIRES • Evil Twin Ep