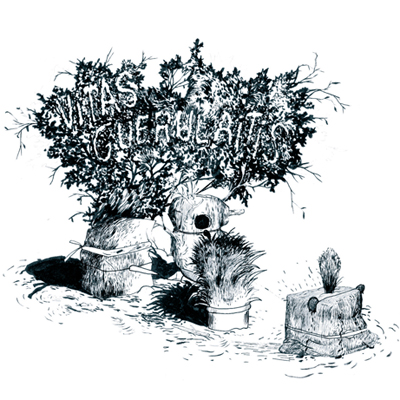 Deep down in the Brussels underground (we really do sound like David Bowie, not?) you can find the tiny label Cheap Satanism.

With such a name you might think that we’re dealing with some dark metal label but they’re not.

Okay, you won’t find them in churches but these fine people offer you bands that are neglected by the big media as they’re probably too dumb to understand such music. Yes, bigheaded can be a reason as well!

Along with the very fine Baby Fire (soon be reviewed here as well!), Cheap Satanism brings you in association with those other weirdoes, Tandori, a cd from a band named Vitas Guerulaïtis.

By coincidence I found out yesterday that there is a musical term that is labelled as shitgaze and in the case of this trio we’re dealing with tennis pop!

You can blame it on the band’s name as it seems that they’re named after some famous tennis player from whom I’ve never heard, but the person to blame is probably me.

The band consists from three French activists who sought refuge in Brussels and as it seems they don’t know what to do with their free time, they decided to make some noise.

Sometimes shit, sometimes brilliant…makes us think of life, not?