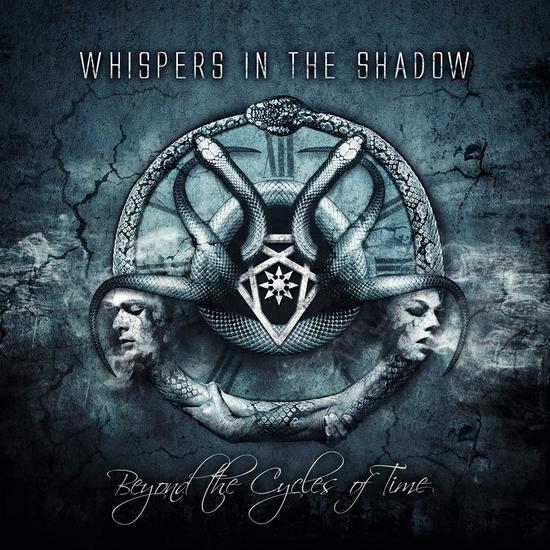 Beyond the Cycles of Time

“This is departure, this is goodbye, the last chapter is now written, no truth here and no lies. Into chaos we fly.” (Whispers in the Shadow - The Departure). 2008, 2010, 2012, 2014. Whispers in the Shadow stay true to their own tradition and release with “Beyond The Cycles of Time” the long-awaited last part of their epic four-album-cycle. The album has already made history in the WITS universe even before the recording began. The band managed to mobilize their faithful fan base so that the crowd funding-campaign for the album on pledgemusic.com reached 100% in just five days. As I'm a follower, I was one of those to see it happen and the fact that it happened so fast says enough about the band and their fan base! I must say that the crowd funder bonus cd is absolutely great ('Dead Letter Songs 2007-2014')! I'm since I start to listen to music a big fan of David Bowie and hearing the new version of his 'Scary monsters and Super Creeps' touches me deeply. It's simply a great version! Other nice covers are the U2 cover 'Until the end of the world' or even the Gary Numan track 'I Die You Die'. The other songs are songs of their own (and once again: really worth it!): 'Broken Arrow', 'Falling Skies', 'Tower Control'... All typical and great Whispers In The Shadow songs!

Thematically, Whispers in the Shadow took their path into the depths of occultism with their album INTO THE ARMS CHAOS, released in 2008, and started a four-album-cycle, which deals with the four alchemic stages of the transformation. Since then they took the listeners in ever new worlds of sound every two years, starting with epic songs (INTO THE ARMS OF CHAOS – 2008), to harder rock-sound (THE ETERNAL ARCANE - 2010) and tribal noise-rock (THE RITES OF PASSAGE - 2012) to the disinfected dark wave (BEYOND THE CYCLES OF TIME - 2014). The artwork of every record, each one linked to the previous album, is another linking element aside from mystic voice samples and the lyrics which are inspired by occult greats like Austin Osman Spare, Kenneth Grant and Aleister Crowley as well as authors like Philip K. Dick and H.P. Lovecraft. The whole collection of the diversified artworks, which have been designed by SPINE for WITS in the last six years,
are published as an own Whispers-tarot deck.

So, now that you have the full story and fully understand what the story behind everything is, let's listen to the cd and focus on the music...

'Crossroads' has nothing to do with Bon Jovi, the lyrics are clear... and might inspire some... Love the epical sound and Ahsley's voice. Love the clear bass sound and synths! I think this one will be the opening track of the new tour, but correct me if it's not, as who am I? Another song in which bass player and synths play a great role is 'His name is Legion'! Simply love the sound and the well worked out studio work! The more I listen to the cd the more I start to think about it as an anno 2014 David Bowie construction with a singer playing a role (in a very brilliant way). 'Left Hand Anthem' is a bit of a scary song, with dito sound. It feels a bit like the demonized version of The Cure. 'The Sacrament' goes even darker, more like a nightmare! Ashley does a great job on this one with his voice, I almost got hypnotized! 'Safe and Sound' is also spooky, but with a less threatening sound, however the lyrics are scary indeed! 'Lilitu's Claws' has no vocals, sounds a bit like The Cure on 'Disintegration' but with that devilish twist and the typical sound of Whispers in the Shadow. 'Incantation' sounds more like a dark dream, with the great questions that we all ask ourselves at some point. The Dark side of life comes out during this one, unsure about the direction this cd will take... However the sun shines outside when you listen to it all gets dark and narrow. No big smile whilst listening to it. Love the hypnotic guitar and synth sound, in combination with the great vocals. 'Agent of Chaos' has nice lyrics, perfectly fitting the dark sound. I feel that this one will do some damage during a concert! 'The End Of Future' and with the title all is said. It needs great people to evoke the right setting and in this case it all fits in well! Love the spooky piano synth and the hypnotizing sound! This one might have been fitting enough for the most recent Final Fantasy game! 'Adversial Light' is a dark soundscape with a hypnotic synth vibe. 'The Departure' is a great end song, not only end song of this album, but end song of 4 great albums! The hypnotic guitar, synths and voice draw you deeper and deeper into the chaos and darkness...

The circle is round, we are done, but it's only a beginning of something new... What will be the next surprise?!

Whispers in The Shadow is a great band and it's clear that they keep confirming and keep producing great work! I hope to see them on stage, but that's up to the bookers all around the world!

This one is simply a dark jewel, bound to chaos us and leaves us with a strange feeling and the repeat function on, so that all can restart again and bound even more, taking us deeper into the dark sound, taking us deeper...