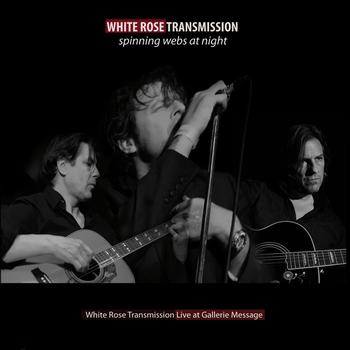 Strange enough not that many people seem to be aware of it but White Rose Transmission is what can be described as a super group.

Originally set up in 1995 by Carlo Van Putten (The Convent) and Adrian Borland (The Sound), this band released some great albums which were another proof that there was definitely life after The Sound, even if it’s quite painful to write words as such.

Later on this band got involved with cult icons like Mark Burgess (The Chameleons), Marty-Wilson Piper (The Church) and Amanda Palmer (Dresden Dolls).

When Adrian took that final sad decision, it seemed like if the band was doomed to disappear but Carlo found help from long-time friend Rob Keijzer and Frank Weyzig who used to be in the primal line-up from Clan Of Xymox and of course his own (underrated) band Born For Bliss.

How great their former album “Spiders in the mind web” might have been, we’re pretty sure that this trio already have accepted that they will be a cult band as well.

For some reason it always seemed to be a bit better in Germany and so it happened that White Rose Transmission played some dates over there.

Their latest cd offering is a live registration from a show they did at the Gallerie Message in Monchengladbach.

The result is a great live album and in some way those live recordings seem to dig deeper, more naked and more touching.

After each song you can hear Carlo say something in bad German but it are words for respect they share for both their audience and their mentor who is staring upon them somewhere in heaven, realizing that some current artists still cherish his anthems as this album features one of the most beautiful songs he has ever written, “Silent air” and that might be the two words that capture this album as well: breathtaking…

Next reviews
QLUSTER • Fragen
SHOULD • Like a fire without sound
HERPES • Symptome und beschwerden
MIST • House
RISK RISK • This is 1983
ZERO A.D. • All my beliefs
COMBAT VOICE • Mons, The Dark Cat | 30/05/2011 | The return of great Belgian EBM
THE BOXER REBELLION • The cold still
RASALHAGUE • Rage inside the window
ALAN VEGA & MARC HURTADO • Sniper