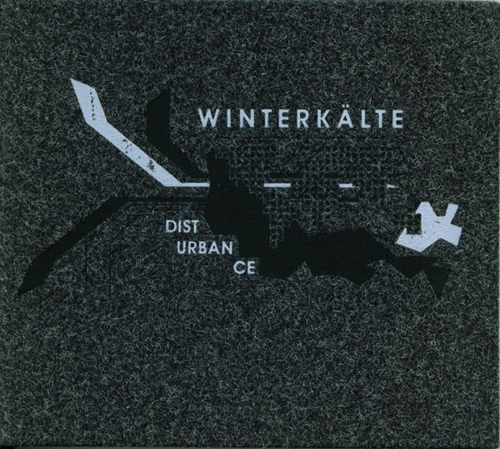 The destruction of the world caught on cd! There's no doubt Winterkälte is one of the harshest exponents of the electronic industrial scene. Eric de Vries and Udo Wiessmann don't release a lot but when they do it's a direct hit. This one is just a reissue but hopefully it means we can also expect some new work in the near future. From 2004, it's nearly ten years old but if you're a newbie, you'll be surprised how modern all this rhythmic noise or industrial techno sounds. Difficult to label, it suffices to say they create pure aural beauty.

"Solar Peace" is the machine that gets reluctantly set into motion and from "Yes2wind" the earth shattering device is wrecking havoc on a global scale. Some "songs" are based on pounding beats while still providing enough earcandy (or eardamage). Or what did you expect from titles such as "Nuclear Free North America" or "Ban Depleted Uranium Weapons"? Imagine a powerdrill in your ear while the previous victims are still screaming out their last breaths.

"Modulation Four", tv static on the highest volume on top of a relentles drone makes me a happy boy. That shit works like a charm with the next one, an almost cheesy drum rhythm with additional noise explosions, dripping with fun.

"Pops" might sound silly, but it's an earthquake of noise of scale 10,000 on a scale of ten, GREAT!!! Needless to say this reissue is a must have! Not for the faint of heart so don't say I didn't warn ya'll!

Only comment I can give, the address of their web site as shown on the cover, doesn't work anymore... But here you get the right one, now move on!