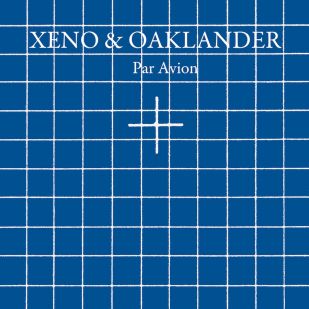 Xeno and Oaklander are a minimal electronics duo based in New York. Band members are: Miss Liz Wendelbo, who is French / Norwegian, and Sean McBride from Maryland. They already began writing music in 2004, and became known for their exclusively use of analogue synthesizers and instruments only.

With their new album ‘Par Avion’,French for ‘By Plane’, they bring these big analogue sounds, together with the nice fluttering female vocals of Liz. The album’s title is a reference to postcards, and used to mark airmail. Most songs are ‘postcards’ of love, with romantic messages from the past, and love mementos for the future. Together they make an album of contrasts, the songs go from upbeat to downbeat, slow to fast, so ‘Par Avion’, gives us a diversity of sounds. The whispering vocals by Liz, sung in French and English, bring some exoticism to some songs. The warm voice of Wendelbo (some people compared it to Francoise Hardy or Jane Birkin) on the cold electronic sound of the synth wizard Sean McBride give most tracks a perfect match between light and dark and warm and cold.

Par avion will be released on cd and digital format on June 24th, and on LP with a very special edition, limited to 350 hand numbered copies, that will include a flesh colored vinyl and a rose-scented art perfume insert, allowing further personal exploration of synesthesia. This album is really good, and brings what can be expect from this duo, dotty keyboard loops, drum machines, but still with a minimal synth touch and very variable.