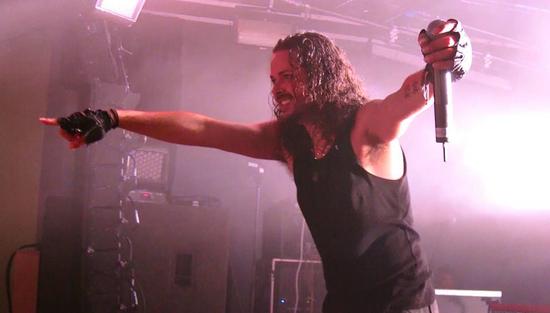 The only band from Holland to play at this year's Infest festival in Bradford (UK) was hard electro powertrio XMH & who could resist to a nice invitation to see them on stage in this great venue? Over the last couple of years XMH have build up a strong live reputation in the London area, and now it was time to show the north how the dutch make a party. The energetic show from XMH was highly acclaimed after seeing a few too many 'staring-at-your-laptop' bands (plz don't see this as negative critics, i just love some action on stage) at the Infest. Having seen XMH live several times now (thx to You-Tube, even more), they never get boring. From the very first minute singer Benjamin Samson was rampaging the stage like a madman, climbing the barricades, etc., this guy will do everything to grab your attention! For those not familiar with XMH, their music is a blend of Industrial and EBM with a trancey edge. Comparisons are inevitably made to the Netherlands' other electro superstar Grendel. While the bands are certainly similar, XMH does have that trancey edge and a much more playful sound. XMH only played a few songs from their 2010 album 'State Of Mind', and threw in 5 new songs from their upcoming album 'In Your Face'. Playing 5 new songs seemed a bit risky to me, but the songs are so extremely danceable and they got well received by the audience. My favorite new songs are 'The Business', 'The Blind' and 'Snakes'. The new XMH songs also have more room now for Isa Garcia's backing vocals. During the song 'Forever' she was doing the main lead vocals and Benjamin the backing vocals. In 45 minutes the band fired 9 songs at us and in my opinon this was way too short. At least we know their new album is going to be a killer! To end the review I think a Facebook quote from the audience pretty much sums it up: 'It's rare that I dance so hard to a band that I can wring sweat from my top afterwards, many times. Congratulations, XMH, you have the honour of that status from your performance at Infest!!'

Lay You To Waste

XMH new Digi EP The Business out now for download at http://alfamatrix.bandcamp.com/album/the-business-ep