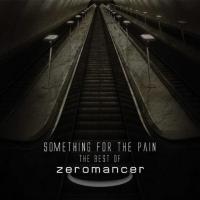 Something For The Pain (best of)

You’ll either love or hate the electro rock by Norwegian band Zeromancer, but one thing is sure though: those who dig it, embrace them totally. So far this band who were in another life simply called Seigmen have delivered six studio albums and as every band has their right to put out a “Best Of…” (even those who don’t sell a thing), Zeromancer released Something For The Pain which has become a double album.

This compilation is a nice retrospective from everything they did between 2000 and 2013 as every album features three or four songs. The band went from the very beginning of their career to America's west coast and you can definitely hear that. Their first hit Clone Your Lover was a bit goth, but the more they evolved the more they were sounding like a mixture from Nine Inch Nails and (of course) Marilyn Manson (without the stupidity though).

On this album you’ll find 20 tracks and all the clubhits are included: Döppelganger I Love You, It Sounds Like Love (But Looks Like Sex), The Hate Alphabet or My Little Tragedy. Of course they have added an exclusive track to “tease” the fan (don’t believe that!) which is the electronic-like The Underground.

Personally I’m one of those who think that one album by Zeromancer in your collection is more than enough and I guess Something For The Pain is the ideal solution. Devoted fans of course can skip this release, unless if they really want that one song…