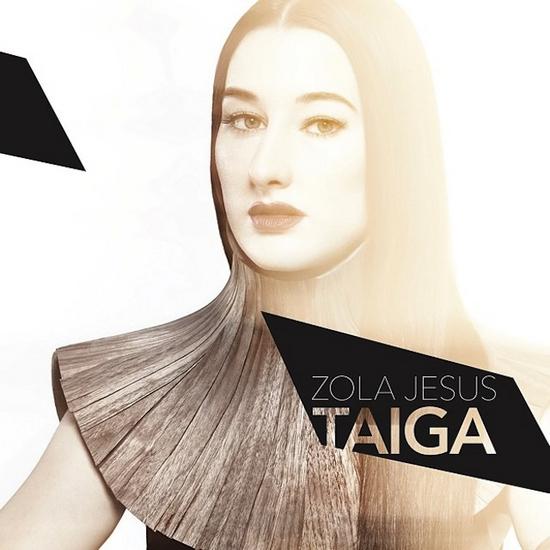 Nika Roza Danilova is an American singer with some Russian ancestors. Her voice is often compared to the one from Florence Welch. Zola Jesus’ new album is called Taiga: the Russian name for the boreal forest. She herself grew up in a desolate Wisconsin-forest. To write this record she left her apartment in LA and moved back to that rural region.

The title track Taiga opens the album with nervous drumbeats, sounding like ethereal drum and bass. The second track is the album’s lead single Dangerous Days. It has a catchy chorus, although singing about dark and dangerous days is exactly what this album lacks in my opinion. The cold electro and the industrial elements from the early days are gone. Taiga sounds more poppy and Nika’s voice is more prominent. Zola Jesus worked in a rather original way. She first wrote her songs a capella and later added the music. This results in a more intense and emotional vocal performance. In the past she used to do that quite different (first the soundscapes, then the vocals).

Hunger is another catchy a pop song. Since I read that Niki admires Alicia Keys and Rihanna, I can’t help that crossing my mind when hearing Go (blank sea).

Luckily the second half of the album sounds gloomier. Lawless, Long Way Down and Hollow are dramatic songs, built on an electronic basis with brass instruments on top of it. The album ends in an epic way with It’s not over. The song is worked out with nice details that you only hear after listening a few times. Although Zola Jesus proves her craftsmanship in the songs that are mentioned before, the rest of the album isn’t so convincing though.

For me Taiga hasn’t got this much to do with dark wave. Zola Jesus became “soft-gothic” pop music, like Bat For Lashes but then electronic. In the past Zola Jesus wasn’t always that easy-listening, but it sure was interesting. As stated before: just not dark and dangerous enough!