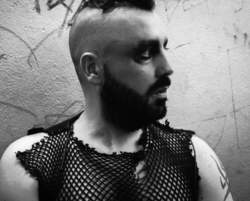 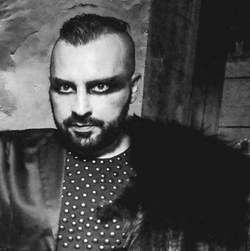 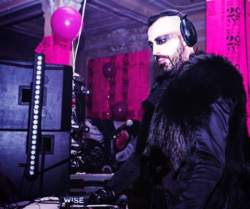 Almost Everything That Is Produced Today Makes Me Sick

We are more used to see you releasing EP’s although “Damned” is already your fourth full length album. How much of the early Adriano Canzian sound do you recognize in “Damned” and what have been the main evolutions/changes?

My 4 albums are at the same time very similar, but also very different. Similar because you can hear my trademark, but very different because each album is based on a different concept and topic. The last one, "Damned" is an experiment. Each track was made with different artists and revealing different styles. I wanted to ‘contaminate’ my sound with other sounds that don't belong to me.

"Damned” is a truly ‘artistic collaboration’ between you and 12 guest artists. How did this idea and concept come true, did you have personal criteria to select those artists and what has been their real input?

I chose the 12 artists because I like them and because their music is very different from each other. The productions have been made in many ways; each artist had a different conception of collaboration. Some have created loops and sounds, others have written the lyrics and recorded the voice, but I made all the final arrangements.

I can imagine it’s not an easy thing to accomplish such a release featuring numerous guests. What have been the main difficulties in the global process and the most surprising songs for you?

In reality it was not easy; 12 great artists with great personalities and a strong character, but we managed to blend our musical worlds quite naturally. I think this happened because we have mutual esteem and respect. The track that surprised me the most is "The Ones" with Yasmin Gate; an EBM / ‘sexy’ piece. Every time I listen to it, it starts making me shiver.

How do you perceive yourself as an artist/musician and producer when referring to elements such as sound creation, -equipment, -mixing and -production?

I am an unconventional electronic music producer. I do not follow trends and I almost never listen to new productions. Almost everything that is produced today makes me sick. I prefer to draw inspiration from the ‘old-skool’ music of the late 80s and early 90s when creativity was at the highest level. In fact I only use old software.

I’ve always been intrigued by your image, which I think is also an important item. What do you try to express and how do we have to connect music and image?

I grew up in the 80s, which was a very creative and transgressive era. The musical groups have given great importance to the image. Men put on make-up and dyed their hair… The image, the photos, the video outfits for me are as important as the music I compose.

We’re at the beginning of a new year, but what have been and according to you the most noticeable facts and evolutions in the electro-underground scene during 2018?

As I said before, I do not follow the underground electronic music scene. There are too many releases every single day that I find horrible. And I do not want my ears to listen to horrible sounds so I follow some artists that I love a lot, but only a very few of them can catch my attention.

EVI VINE • '..I am a human being taking one step forward-two steps back like everyone else'
MONICA RICHARDS • I always felt out of step with the Modern world, ever since I was a child, I do even more so now.
MORTAJA • It Always Has Been My Dream And I'm Enjoying It A Lot
SIMON SCOTT (SLOWDIVE) • 'We've always wanted to have a say in our production.'
WAYNE HUSSEY • 'I think for every action there is a reaction.'
GOETHES ERBEN • Goethes Erben: Strangely enough, those who cry the loudest are not those who drown during their flight
HAPAX • Actually there isn't any specific “formula”. We usually instinctively develop an impulse, a feeling, then the song takes its shape almost by itself, in a very natural way and without too much reasoning.
SUBSKAN • I Think The First Time I Heard ‘Industrial’ ‘ Is When I Was Watching The First 'Terminator'
A PLACE BOTH WONDERFUL AND STRANGE • An Interview with A Place Both Wonderful And Strange
WULFBAND • If you feel that guitars would destroy whatever you think Wulfband is about, stay at home