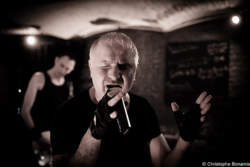 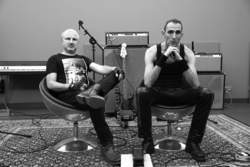 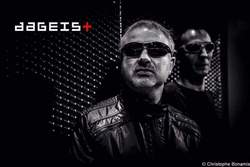 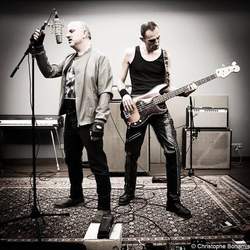 We find our motivation in sharing our music with the people and in the exchanges we have with the public. It is all happiness, because we only meet wonderful people.

DaGeist is doing well. This young - well, the band is young, the members are a bit older - dark wave and electro band issued its debut 40 earlier this year. We love it and we hear positive echoes about the live performances. We have not seen the band play yet, but that will change soon. On October 14 DaGeist will perform at the 16th edition of the Dark Entries Nights at the Kinky Star in Ghent. We asked a few questions in advance.

DaGeist released the debut album 40 a few months ago. Congratulations, we love it. Are you satisfied?
Thanks for the congratulations, Xavier. We are obviously very happy to have released our record, because it is a lot of work and it is a project that is close to our heart and that we absolutely wanted to achieve.

You describe yourselves as ‘new wave, cold wave, darkwave, electro’. More or less everything that is popular in the wave scene. Do you feel that the combination of new wave guitars and basses with electronic darkwave appeals to people?
Indeed, DaGeist is a bit of a mix of all these sounds, especially the dark wave and electro, and it is true that people love it. The album was very well received by the public, but also by professionals, and it is even received more enthousiastically when we play live!

DaGeist has existed since 2008, but it was a very different formation. You had five musicians back then. How did the band originate, and for what purposes?
In the beginning, the group was an opportunity to come together around a shared passion: new wave. We listened to songs and slowly we have formed a band to play this music together.

After a while, you have limited the group to a duo with singer Schago and Fred on bass. Why?
With life and its requirements, it is not always easy to find time to get together and to have rehearsals and concerts. The two of us are getting along really well and we have the same objectives regarding DaGeist.

But most of the songs were already written in the old formation, right? Have you written new songs together for the CD?
Let us say that the base for the tracks was already present, but we had to rework every song so that the bass sound would come out better. We have already written new songs and we play them live. And other compositions are on the way!

You've worked hard on the right sound for the record. The bass has a dominant position. Fred, you told me that you have carefully analyzed the sound of great bass players like Peter Hook and Steve Severin. Can you tell me more about it?
I've always been a fan of these two bassists and the ‘cold’ sound that they were able to produce with their bass. So I started searching for the same effect pedals that were used at that time - in the 80s - to use them for DaGeist, without necessarily copying what Peter Hook and Steve Severin have done before.

The group has no guitarist anymore. But I can still hear guitars on several tracks. Where do they come from?
It is the old guitarist who recorded them. But we have reworked the guitar to make it fit into the overall mix of the songs.

Why the name DaGeist? It sounds German, but if I'm not mistaken, it is not a German word.
The word Geist is German for spirit or ghost. But we wanted to create our own word for the band, and so we got the idea to add Da before it, so it would still continue to sound German.

The record is called 40, is that a reference to your age?
Absolutely correct! We wanted to use a number as the name of the disc. And we wanted to say that at 40 everything remains possible.

It's not easy to make a record and play concerts at 40 years or more. What motivates you?
We find our motivation in sharing our music with the people and in the exchanges we have with the public. Being on the road and discovering new places, all those beautiful moments in life... It is all happiness, because we only meet wonderful people.

You play live regularly, both in France and in Belgium. We just learned that you are will tour in England. And you will play at the Dark Entries Night of October 14th, of course. How would you describe a DaGeist live show?
We are excited about playing the Dark Entries Night. Thanks again to the whole team. And indeed, in January, we will embark to England. We will play some shows with the musicians of Lene Lovich, including a set in London. The purpose of our shows is to get our dark and sometimes melancholic feelings to the audience to make its mind to travel by giving the maximum of ourselves.

By the way, does the Belgian scene still attract the French to the same extent?
I can confirm! It is a pleasure to play in the Belgian scene. I was born there, in Menen. And it is great because there is always a goth community whith which we have had good contacts for years, and we meet so much... even in Leipzig.

And what are your future plans?
We just signed to the German label Danse Macabre! You can expect DaGeist soon near Germany... We also prepare a 45" vinyl. And we are quietly working on our second album, but we want to do things well, not in a rush. And of course we have to prioritize the planned concerts!

THE ARCH • ‘The Game of Thrones’, inspired by the chaos of the Wars of Roses six hundred years ago in England, is actually still ongoing.
ARNWALD • The main sources of inspiration are my hate, my pain and my own fears
SPARK! • 'Direct' and for real!
THE MISSION • I think I am The Mission’s strongest weapon, but also it’s weakest link.
SATANISMO CALIBRO 9 • I can't understand the so called digital releases.
GRAUSAME TOCHTER • The more you think you know an artist, the more you have to learn about him
MESH • We pour our heart and soul into everything we do but its the listeners reaction that makes it.
REUTOFF • Music for us is the main way to understand the world and to manifest ourselves in it
STOPPENBERG • I am not in danger, I am the danger.
HANTE • Music is a companion. You can choose the soundtrack of your life! It can change your emotions or comfort you like a friend.

Other reviews from DAGEIST
DAGEIST • Music is a real pleasure to share and it doesn’t have to be a commercial obligation.