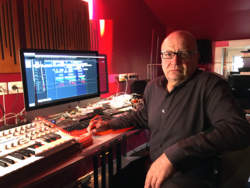 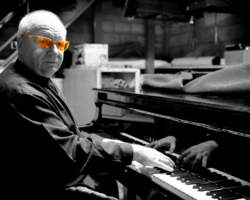 Daniel B will be forever linked to Front 242 but in the meantime we all know he also releases music as Prothese. This project revealed a more experimental and noise approach to music. During the past few years Daniel again started to compose new stuff as Prothese. Like it or not, it sounds like music being created by a sound surgeon who’s decomposing and recomposing sounds and noises. It gave me the idea to ask a few questions of Daniel, who I have to thank for his kind contribution. The interview was possible thanks to the help of Alfa-Matrix owner, Séba Dolimont, while I also have to thank Side-Line and Peek-A-Boo for their interest to each publish this interview as a kind of ‘collaboration’ between both Belgian online platforms.

Prothese is your very own project so I can imagine it also is the most personal one, best reflecting your own vision about music and sound creation. What does it really mean to you and can you tell us a bit more about this ’vision’ and ‘sound creation’?

As you know when creating under the Prothese moniker I have a very eclectic vision of sound creation. I don’t want to be confined in a genre that creates expectations and borders… and fans with a narrow vision of music. Creating music for me is also a question of mood and exploration, also machines can direct the way you approach music design and finally I like to explore music in a fake time frame… going back to how music was made in the 80s or the 60s psychedelic period

I experienced early Prothese works as pure experimentalism and the treatments of noises while the recent productions feel more structured and accessible. How do you see your own evolution as a musician and especially Prothese from the early years until today?

The last release “CHZWaaR+ZMe+aaL” was more structured like the work I did in Front 242 but my recent cassette release “30.30.333 / 31.31.333” (released on Wool-E-Tapes) goes back to very noisy musical exploration. Also at end of this month/beginning of June I will release a double CD called “Hollektrokraut / Hellectrokraut” that wants to take the listener to electronic- krautrock territory or at least my interpretation of it anno 2018.

I’ve always been fascinated by a kind of controversy which states that experimenting with sounds and noises is not the same as dealing with music! What do you think about it and do you rather feel like a sonic scientist/architect or more like a musician?

Well…. all noise is music and all music in basically noise, if somebody thinks that music is only there when you have notes and melody, he should better be an accountant or is already one.

I never feel like a musician… because maybe I have a skewed view of what a musician is…. somebody that masters an instrument while I don’t master instruments (in the classic terminology) as I work with electronics and computers most of the time.

You have always been fascinated by noises and sound treatments, which I think reveals a real creative approach and composing process. Do you have some personal criteria and maybe references when you’re experimenting in your studio and is there a particular way of working?

Not really. As I said before, usually it’s the machine/computer program I’m using, which dictates where you go, but sometimes you get a challenging idea (complete theory at first) of a way you could start a piece. From there, of course, accidents and other factors will push you in or out of the theoretical idea you had to start with. Also setting limitations is a great way to direct your creation.

I also sometimes in the process get reminded of music /composers/genres I know. And then I use these to direct my process by addition or abstraction or just by incorporating a little cliché.

The early years of electronic music were characterised by good old analogue and modular synths, which you’re still using today. More and more artists are getting back to these pieces of equipment but can you tell us a bit more about your affinity for these ‘instruments’ and their complexity?

The instruments are not really complex and it is also not just for the sound (I’m not really into the analogue vs digital thing, I like both…. but I think tubes are more musical (lol).

The thing is that with analogue the manipulation of sound (because of knobs for function design) is much faster/intuitive… a bit like playing a music instrument like a guitar or a violin. And we still have not explored all the possibilities of what analogue can do (there is also the ageing process and the inherent difference between even the same machines).

Today we see a mix of technologies (certainly in modular synths), analogue and digital being interfaced and modulated by each other.

I remember that you released the SPEED TRIBE project, a special and somewhat conceptual project around the legendary ‘Le Mans’ race! I personally think the noise of race cars is one of the most orgasmic sounds I’ve ever heard. What do you think about it and do you have other exciting sources of noise?

Another noise I really appreciate is what you find in repeating /looping machinery- and nature noises.

Design also seems to be an important part of your work. Also the way you play with words, languages and spelling song and release titles. Tell us more?

There’s not really much to tell. I hope it speaks for itself. I just feel that the package is an integral part of the final product/object/creation and if you use words, they also should direct/misdirect the recipient of your creation.

Early this year, you made a very strong live performance with Prothese in Belgium. Many people in the audience told me it had the original core strength & power of FRONT 242 that they are sometimes missing nowadays. What do you think?

I must say I was surprised by the reactions because I did not expect it to go so well and without a glitch and secondly by the nice comments I received afterwards. I hope I will get more possibilities to show the stuff live (wink, wink… promoters (lol)). I cannot comment about the missing parts.

What’s next on the Prothese front? You’ve been quite prolific lately!?

I just have more time and desire to develop and create…. but then the most important is to just release it and not file it away as I used to do all these years.

And as I already mentioned, I just released an experimental cassette on Wool-E-Tapes (1 hour of musical noisy stuff), also available to download or on a USB-digicard. Next I will self-release the double CD: “Hollektrokraut / Hellectrokraut”, which is planned for the beginning of June. By the end of the year, there should be another Prothese project (more structured and hard like “Chwaartz”) and also a new Nothing But Noise release.

THE LIVELONG JUNE • OUR AIM WAS TO PRODUCE SOMETHING THAT SOUNDED LIKE NOTHING ELSE THAT WE LISTENED TO
LEAETHER STRIP • ‘MY BIGGEST HERO IS ALAN WILDER’
PARADOX OBSCUR • EVERY NEW ALBUM IS GETTING CLOSER TO THE FUTURE…
FIRST AID 4 SOULS • Composing Songs Begins By Reading A Lot Of Books
PERSEPHONE • Maybe You Can Describe The Production Like A Puzzle: You Have To Find Each And Every Piece And Put It Together
ERIC BILITCH • 'I WOULD NEVER WANT TO MAKE A MOVIE FOR EVERYONE!'
WHISPERS IN THE SHADOW • 'I have no high hopes for humanity anymore...'
MARTYRIA • The Process Of Creating Our Music Is A Way Of Expressing This Spiritual Transformation
ELECTRO SYNTHETIC REBELLION (ESR) • ‘My Work Has Never Been Driven By The Trends Or The Dancefloor/Club Appeal’
WARM BODIES • Live - 27th of March - Antwerp Music City