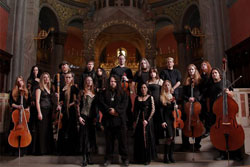 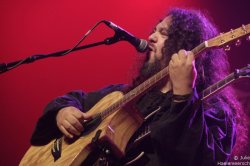 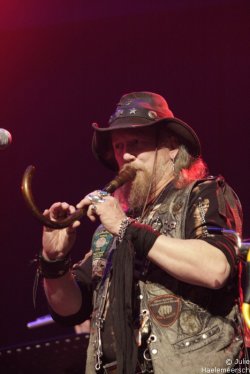 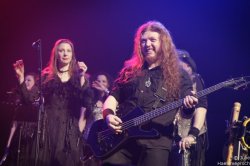 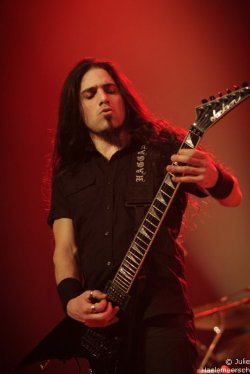 Haggard featuring in a PC game like Blind Guardian? That would be cool!

Haggard is according to me one of the finest metal bands on earth! This year they will finally release a new cd and Trolls & Legendes booked them on the 30th march 2013 in Mons. Very good reasons to start a little chat with Asis who was so kind to answer in his spare time …

Funny understatement to call yourself Haggard, as we know for sure Haggar the Viking (the funny comic figure). I understand you choose your name for another reason, right?

Haha, well, the comic you are speaking about is called "Hägar", sounds a bit like Haggard, but is something completely different. Haggard comes out of the old English language and means "wild". We chose this name because it does not sound so "bloody" like other death metal bands name.

Bringing ‘Hijo de la Luna’ is great, how did you end up doing it? Any more feedback from the original makers?

Hijo De La Luna was an honor given to our Latin American fans. That´s why I decided to record it. Luly, the girl who sung it, sounds a bit like Ana Torocha from Mecano, who brought up the song first. And well, no, they never got in contact with us - unfortunately, because I am really interested what they would think about the "harder" Version.

Do you play often at places like ‘Trolls et légendes?’ and what would you visit if you had the time or want to have a meet and greet? Did you ever play at the Olde Hansa in Tallinn (Estonia) for example?

No, we don’t do it often, and I have to tell you that I am sure it will be a very special event for Haggard. I am excited about Trolls et Légendes, really. I love places and events which are made for "unusual" bands. Yes, we have been to Tallin on our last European tour, but we never played at the Olde Hansa.

Never thought about working together with In Extremo (Feuerseele or even Lacrimosa) or some other similar band?

We met a few times with In Extremo, they are nice guys. But I was never thinking about working together with them, nor another band. Haggard takes all my time and power for itself.

I love the mix of the different voices but how do you manage to make them blend into the total package? It seems so difficult? Honestly this is one of the finest things about Haggard, it creates an own sound.

Thanks for your good words! Yes, i also think that the many, woven different voices are one of the Haggard´s trademarks. It is not difficult for me, it is a matter of composing. They reflect musical dept, which is - for me - also a sign of quality. Don´t get me wrong, there is also quality in a 3-chords song. But a different one.

One of my favourite Haggard songs is ‘Final victory’. I’m very keen on the total package: it really shows off what you can do and can deliver, but what is the song about?

The song is about Michael de Notre Dame, also known as Nostradamus. Nostradamus had to fight a lot of troubles in his life, e. g. his wife and children died because of diphteria. He was suspicious to the holy church because of his modern knowledge in medicine and astronomy. The final victory means that he did win at the end: His centuries are published, his astronomical knowledge nowadays is "sate of the art". He went through a lot of bad things, and if he is possible to do it, then we are also. So, fighting for our beliefs is the best thing we can do.

How hard is it to survive the economic crisis?
Hahaha, nice you ask this to a musician ^^.

What is your opinion according to the end of the world (I survived the 1999 crash, the 21 of December 2012 …)?
There will be an end of this world, sure, but it will be caused by man... that´s the question. I dont believe in these theories. One day it will be over.

From where does your interest for old stories come?

Hmmmmm... guess from my childhood. I was always interested in legends and fairytales. In the story behind the story.

Somehow i feel like Haggard has done the same thing as Blind Guardian did, featuring a PC game (the PS3 game called 'Sacred2: Fallen angel'), but i can´t find any info about did you or am i wrong? It feels like something that must been realised?

No, until now we did not feature a pc game, though I´d really love to do it. Haggard´s music in a cool game, yeah!!! ^^

Are you Tolkien fans? Did you like the first Hobbit movie and why?

I like Tolkien as much as I like Hohlbein or any other fantasy writer. Well, he was creating all this world with the language and so on. And I really respect him for this. But I am not a Tolkien maniac. I did not watch the Hobbit until now.

For years and years the Nordic metal scene had a bad name, like idols of Satan, burning churches … Did you ever had any trouble’s because of that? How do you feel about it anyway?

Violence cannot be the way to spread your ideals and the things you believe in. The churches they burnt were somekind of a cultural heir, beautiful wooden ones. this is sad.

Haggard versus a complete Philharmonic Orchestra (why not the one from Frankfürt, like Deine Lakaien did for their anniversary) is that an option for a live concert? How would you feel about it?

We luckily had the opportunity to play with an amazing orchestra from Plovdiv/Bulgaria in 2012. Oh my god, yes, I´d love to! But then I would "pimp" the Haggard songs with more voices and more orchestral parts.

What can we expect from Haggard in the near future, a new cd?

Yeahhhh, 2013 the new CD "Grimm" will be released. There will be more info soon!

What can Belgium offer you (their fans, beer, chocolats, waffles, cities, old towns …)? Any good thoughts about Belgium to conclude this interview?

We love Belgium! The fans are outstanding, the atmosphere was always excellent. And we love your food. And surely your beer, but I´m not drinking any alcohol.

And it was indeed a great gig:

SALTATIO MORTIS • We want to give people the hope needed to fight death!
ASYNJE • In our music we want to explore the beautiful and dramatic Nordic nature and we want to tell some new and old legends of the North.
HENKE • ''the younger siblings of Goethes Erben''
UNITED AND IDENTIFIED • A shooting star in a futurepop-galaxy
ORGANIC • We do not like working with blinders on. That's why our album is hybrid, even surreal, with many different colors.
BLABLARISM • True inspiration is quite elusive. If I start making something under 'conscious' inspiration, I am afraid of getting too literal.
SAD LOVERS AND GIANTS • If we had become more famous back in the day, it might actually take away from the feeling of discovery that people have now.
PETER HOOK AND THE LIGHT • To do the Joy Division music as we did, it really gave me a second lease of life! (Exclusive video interview)
STIN SCATZOR • Highlights were when we played abroad , the low ones ? Too much to mention ! :-)
THIEVES OF SILENCE • When you start a band it’s very hard to find your own sound