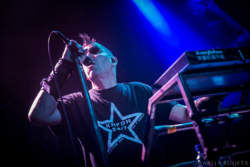 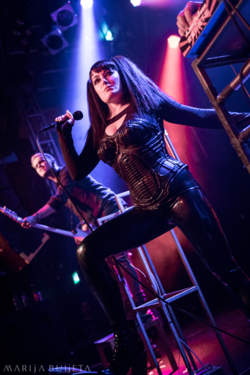 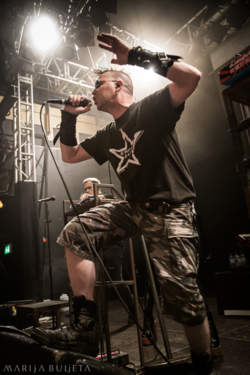 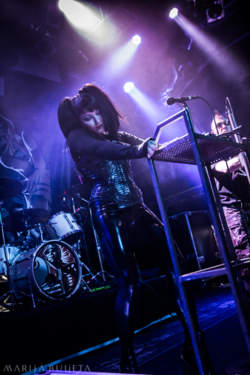 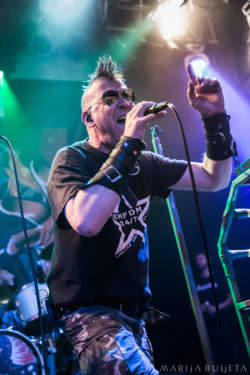 Sascha Konietzko Gives Us The Latest On KMFDM

KMFDM is undoubtedly one of the most prominent bands in the history of industrial music. The group was founded and is lead by the German multi-instrumentalist and diverse artist Sascha Konietzko. KMFDM have been active since the 80s, first as a performance art project. Sascha collaborated with other multimedia artists to create the unique performances. Their first album "Opium" (1984) was released in a limited run of cassettes and distributed through the Hamburg club scene. It was re-released in 2002. Their second officially released album was "What do you know, Deutschland?" (1986). It was produced by Sascha in collaboration with his “partners in crime” En Esch and Raymond Watts. Immediately after their first USA tour with Ministry, Sascha moved to the USA, where the band gained a lot of recognition, Esch followed that move a couple of years later. Throughout the years KMFDM's line up changed many times; people were joining, leaving, reuniting, but there has always been someone who has always been there, and that is Sascha Konietzko. This September the band played in London; the concert was part of their KMFDM Hell Yeah UK tour, on which they performed together with Lord of the Lost, and I had the opportunity to see them live. In October they went on the US Hell Yeah tour with Ohgr. And, after a well-deserved rest, Sascha kindly agreed to answer a few questions for us.

1. Hello Sascha, and thank you for the opportunity to talk to you. I know how busy you were this year. You performed at Brutal Assault festival in the Czech Republic and Germany's M'era Luna festival as well as a show in Berlin in August, you toured the UK in September and then you had an extensive Hell Yeah US tour in October. Judging by your social media, the band rocked in each venue. The London show was packed and on stage KMFDM seemed like an unstoppable machine of creativity, energetic performance and enthusiasm. How do you feel about this entire touring experience, encompassing Brutal Assault, M'era Luna and the two countries?

Sascha: It was great fun actually. Especially the US tour was an absolute success, best one ever! The UK was great as well and the Euro festivals are just - the Euro festivals ;-) It's always a bit like a zoo doing them. But all in all everything went as good as it can get and then some.

2. You played at both European and USA goth/industrial festivals. This year you played at M'era Luna in Germany and Cold Waves in Chicago, USA. Can you tell us if there's any difference in the overall feel, atmosphere, the crowd? Where do you feel more at home when it comes to playing at festivals?

Sascha: Considering that I've lived in the US nearly 20 years and have spent most of the time since KMFDM's invention there, it's clearly been a homecoming of sorts having headlined the Chicago thing. I've lived in Chicago for something like 6 years and that's where the Wax Trax label was located and I just pretty much know everybody.

In Chicago and Los Angeles the crowd came for us, at the other festivals we were a band amongst many others.

3. You released Hell Yeah album this August – it’s among my favourite KMFDM albums, just for the record – and in it, you preserved not only the distinguishable electro-industrial sound, but also your societal and political lyrical context. However, you made a step further in the sound evolution; the album sounds fresh, dancy, and, at times, even funky. What was your musical and lyrical inspiration for this particular album?

Sascha: Hard to pinpoint, really. I think it was just the way it had to turn out, there wasn't all that much thought going into it beforehand. Contrary to what some believe, it is not an album written about the Trump bullshit, except of course, the song FAKE NEWS. We worked with Chris Harms from Lord Of The Lost, who also opened for KMFDM in the UK, he played (almost) all of the guitar stuff on the album and I afforded myself the luxury to work with one hell of a sound-engineer, B. Lawrenz, in order to make the recordings sound as good as possible, instead of brooding over the mixing process for months and months on my own, tweaking and tweaking with no end in sight, as I have in the past.

4. I am sometimes surprised by the names certain industrial music artists give as their early inspiration. I have already read that you were inspired by David Bowie and Marc Bolan, among others. Can you tell us how you were influenced by Bowie and the glam rock era?

Sascha: It was the music of my time, when I first actively began to listen to and buy music, that was the stuff that was edgy and cool. It's what you saw on TV in these weird playback shows like Disco 2000 and Musik Express and whatever they were called back here in Germany in the early - mid 70s...

5. How did you make the decision to move from Germany to the US? Did you feel the USA welcomed KMFDM more warmly than the European crowd? What was behind your decision to move back to your homeland again after so many years?

Sascha: Moving to the US was an absolute no-brainer after having experienced the enthusiasm people had for KMFDM during that gigantic tour we did with Ministry. I packed up my bags and moved straight to Chicago, lived at the Wax Trax label offices and jump-started KMFDM. We were widely celebrated in the US whereas over in Europe people wouldn't get it at all, and they still don't, really ;-)

6. I interviewed Raymond Watts a while ago. How did the two creative minds get together and what was your musical collaboration like?

Sascha: He had access to a recording studio and I had no money to rent one, so there you go.

We then worked for a while, then he relocated first from Hamburg to Berlin, soon thereafter to the UK and I was in the US. We reconnected in 1994 when I invited him to record with me in Seattle. Over the years we had our moments where things were going pretty well and then there were phases during which we both did our own stuff.

7. The line up kept changing over the years. You worked with so many renowned names, who participated either as band members or as guest artists. I was always interested in the creative process behind the group of people. How does it look when you work with so many people who have different ideas, backgrounds, influences, minds?

Sascha: It's like an orchestra, it won't work without a conductor. Seriously, it takes a lot of preparedness, a well organised crew of technicians to capture every potential outburst of unforeseen creative ejaculations in the studio.

8. Can you tell us about the current line up, besides you and Lucia? What I would like to know is how today’s KMFDM functions both regarding the studio work and live performances.

Sascha: Currently the line-up is rounded up by Andy Selway on drums and Andee Blacksugar on guitar, besides Lucia and me. As for how it functions exactly, it's something I have yet to experience since Andee is the newest link in the chain. Live performances with the four of us went flawlessly, as for the studio work, we are just very early on in the process of recording and writing new material together.

9. I am very much interested in your collaboration with Nivek Ogre. How did that come about?

Sascha: Ohgr and I have been friends since that legendary Ministry tour where he was a guest performer. We go back something like 27 years and he and his band opened for KMFDM during our recent US tour. He's a fantastic performer and a great man.

10. Nina Hagen made appearance as a guest singer on Adios. How was it to work with Nina?

Sascha: It was hilariously funny and wonderful. She's such a character, I absolutely adore her.

11. I am also a huge fan of the artwork on your albums. Can you tell us how you met Aidan Hughes, the man behind your cover art and how that collaboration started?

Sascha: Aidan and KMFDM were introduced by the owner of a very small record label, Skysaw Records, operating out of the Liverpool area, who did a UK release of WHAT DO YOU KNOW, DEUTSCHLAND and wanted to use different cover art than the original German release. We connected immediately and the rest is history. Funnily and totally coincidental, we became neighbours for a while in Seattle. I had bought this building and it turned out that he lived about 20 metres away from me on the other side of the block.

Sascha: It was a job, no less and no more than that.

13. Do you think that pointing fingers at artists and blaming them for the tragedies that happened because of the monstrous minds shows how easily the artist can be picked on? What were your thoughts about the tragic events and media turning them into “who's to blame, why not them”?

Sascha: What exactly are you referring to? Are you going "Columbine"? In that case all I have to say is that it's very shortsighted and irresponsible to blame music and art for the effects of mental illness combined with "wild-west" gun legislature.

14. After the 20th album, do you already have something new in the pipeline?

15. When are we going to see you live next? Any new dates?

Sascha: Nothing on the horizon as of now, new album is next, then we'll come out and play again. ;-)

NERVENBEISSER • ‘WE'RE DOING OUR THING AND WE'LL KEEP IT THAT WAY’
MILDREDA • 'It's is very nice feeling to let dark bombastic music hit an audience'
DER HIMMEL UBER BERLIN • ‘EVERYTHING IS FASCINATING IN DARKNESS’
SCANNER • ‘FAILURE IS ALSO AN ESSENTIAL PART OF ANY SUCCESS’
EUFORIC EXCISTENCE • Euforic Existence: We like to be put under the heading of EBM, but realize that we are an outsider. I would not want anything else.
GEORGIO 'THE DOVE' VALENTINO • 'Everything I've learned I know from records... (though I often misheard the words)'
EIRIKURA • 'Music can be an uniting and uplifting force and very much a redemptive one for all mankind'
GENE LOVES JEZEBEL • About their brand new album Dance Underwater and more...
STURM CAFE • ‘WE DO ENJOY THE 100% CONTROL BUT IT COMES WITH GREAT FINANCIAL RISKS’
SWEET WILLIAM • FOR ME MUSIC IS GOOD WHEN IT LEAVES YOU ROOM FOR YOUR OWN ILLUSIONS AND OF COURSE A CERTAIN DEPTH’