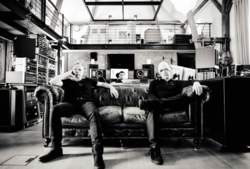 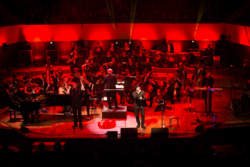 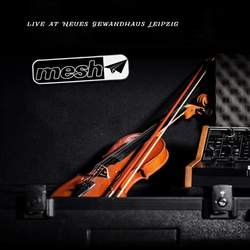 Bristol’s best know synthpop act Mesh, have released a new album, and it’s quite different from previous releases. It features songs recorded at the 2015 "Gothic Meets Classic" event, where Mesh performed new arrangements of their songs by classical producer and pianist Conrad Oleak, with a 65 piece orchestra. Alongside the live recording are three additional reworked songs, which were recorded in the studio with a smaller ensemble and piano. The album comes in a variety of physical media options for the dedicated Mesh fan, CD, limited edition vinyl and a special ’Großer Saal’ collectors box set edition.

1) How did you choose which songs would be reinterpreted? Were there any you wanted to include but were unable to do, if so why? Are there any more songs you would like give the classical treatment to in future?

The way it works was we submitted eight songs that we felt would be good and lend themselves to the orchestral treatment. Of those eight, five would be chosen for the concert.

When we looked through our back catalogue we tried to choose an interesting mix of songs. It would have been too obvious to just go with the well known and popular tracks. It was more of a case of choosing something that you knew would sound impressive with a full orchestral arrangement.

Yes there were loads more we would have liked to have done but five was the maximum.

2) Could you tell me about the process you went through to re-interpret the songs?

When the five tracks were chosen Conrad Oleak took them and wrote the score for the orchestra. To be completely honest all the hard work was done by him. He sent us versions for our approval but there was very little changes to be made as they were so good to start with.

3) Was there anything about the process which you found particularly challenging?

No, not really. At first I thought it was going to be a huge process but things came together really quickly. Conrad said that he felt a strong connection with the songs, chord structures and melodies which made it easy for him to adapt them for the orchestra.

4) What was your favourite part of the process?

I think when we first heard his arrangements we knew at that point we were onto something special. Before that there was a feeling of anxiety and whether or not we could actually pull this off. The first day of rehearsals in Poland was probably my favourite bit. Just hearing it played live for the first time was quite a moment.

5) What was it like to perform your songs with 65 additional musicians at the Gothic Meets Classic show?

The actual concert itself was a magical moment. Never in a million years did I ever imagine us playing with an orchestra let alone in a sold out concert hall. One of the best moments of my life.

I felt a whole range of emotions from nerves and anxiety to excitement and overall pride. Its not everyday you get to do something like this.

6) How and why did you choose the 3 songs which are included on the ‘Live at Neues Gewandhaus Leipzig’ album release as studio classical versions.

At the time of the concert we were still busy writing “Looking Skyward” so when we thought that we might be able to record and release the show we thought about adding some more studio recordings with a quartet and some of the new songs seemed like a good idea. Someone also mentioned “Can You Mend Hearts” so that was included too.

7) Mark – did you have to change your singing style at all on the re-interpretations?

Yes. It wasn't a huge change but concentrating on the timing of the orchestra which obviously is a little less ridged compared to our versions and slightly changing mood to suit the new arrangements.

8) Personally I feel that a classical/acoustic reinterpretation of a song calls attention to the lyrics, especially the emotional content. Do you now feel differently about any of the songs you have reworked?

I personally think for this kind of thing to work you need a well structured strong song in the first place. When we write it is all about the song and not necessarily the production and electronic sounds in the early stages, so when it is stripped down again you know you still have the song. The emotional content and meaning of the song is certainly highlighted when played in this way.

9) Many other acts who go through the Gothic Meets Classic treatment go on to do further acoustic/classical live shows. Any plans to do this?

No, not at the moment. The whole orchestra experience is something we would love to do again or at least incorporate in some of the forthcoming albums but as for an acoustic show no not yet.

10) What did you learn about yourselves as musicians from this experience?

To be told by someone like Conrad who is a very experienced pianist/arranger that our songs were some of the best he has worked on can only elevate your belief in yourself. The whole experience made us look at ourselves as musicians and not just keyboard programmers.

11) Did you learn anything new about your music?

I think it only confirmed that we have some great sounding songs and that however they are performed and arranged they still stand up on their own. All the hours of hard work has obviously paid off.

12) Has this experience influenced your music since?

I have always been a fan of big string and orchestral arrangements and have tried to incorporate that into our recordings albeit sampled or synthetic. I love the lift and emotion this gives songs so this experience allowed us to fulfil our dreams.

KMFDM • Sascha Konietzko Gives Us The Latest On KMFDM
NERVENBEISSER • ‘WE'RE DOING OUR THING AND WE'LL KEEP IT THAT WAY’
MILDREDA • 'It's is very nice feeling to let dark bombastic music hit an audience'
DER HIMMEL UBER BERLIN • ‘EVERYTHING IS FASCINATING IN DARKNESS’
SCANNER • ‘FAILURE IS ALSO AN ESSENTIAL PART OF ANY SUCCESS’
EUFORIC EXCISTENCE • Euforic Existence: We like to be put under the heading of EBM, but realize that we are an outsider. I would not want anything else.
GEORGIO 'THE DOVE' VALENTINO • 'Everything I've learned I know from records... (though I often misheard the words)'
EIRIKURA • 'Music can be an uniting and uplifting force and very much a redemptive one for all mankind'
GENE LOVES JEZEBEL • About their brand new album Dance Underwater and more...
STURM CAFE • ‘WE DO ENJOY THE 100% CONTROL BUT IT COMES WITH GREAT FINANCIAL RISKS’

Other reviews from MESH
MESH • We pour our heart and soul into everything we do but its the listeners reaction that makes it.