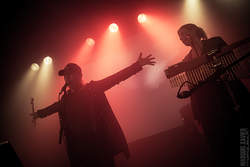 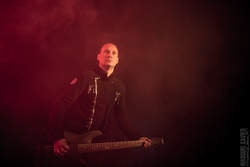 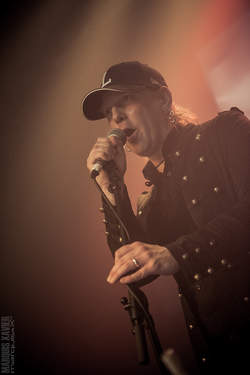 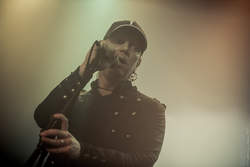 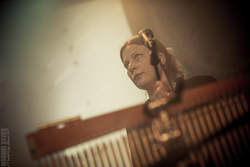 Without people like Porta Nigra the scene would be dead, but for as long as they are around, it's only dying.

Soon another edition of Porta Nigra takes place in both Belgium (Aarschot) and The Netherlands (Rotterdam). Peek-A-Boo is proud to have a chat with headlining Ordo Rosarius Equilibrio.

In March 2016, you will play at Porta Nigra for the second time. What can people expect this time from Ordo Rosarius Equilibrio on stage?
This time in March is my third time for Porta Nigra, unless my memory fails me completely. But don't expect anything, it only leads to disappointment. The only thing you may rely on, is that we will be playing new songs from the upcoming album Vision Libertine.

What do you remember from the gigs in 2010 of Porta Nigra?
I remember mostly everything; sex drugs and apocalyptic pop. Rotterdam, Aarschot and Cologne. First time with Spiritual Front and In Slaughter Natives, and the second time with Jerome and Triarii. It's a fun event, every time again. The club in Aarschot is great. I look forward to doing it all again.

Can you tell us what it means for a band that there are promoters around like Porta Nigra?
It means a lot that there are still active people out there who are genuinely committed and make things happen. Without them the scene would be dead, but for as long as they are around, it's only dying.

We have the idea that the underground music scene changed in Belgium and the Netherlands. There is hardly any room left for (successful) parties and concerts in the gothic, dark ambient, dark folk genre. Do you notice the same and does it affect a band like Ordo Rosarius Equilibrio? We have the idea that bands are playing more in Eastern Europe now, even in Asia (like you did in China).
I think the scene and the overall climate of concerts started changing all across Europe about five/six years ago. And it's fair to say that things are not the same anymore. There are several reasons why. For one, the scenes we are discussing basically consist of a few renowned bands and artists that constitute the entire foundation. When these bands desist for whatever reason, the scenes die with them. Furthermore, the majority of these bands and artists are successively getting older and older, and with age come children and obligations, work, professional advancement, loans and mortgages, suggesting that everyone only operates inside an imaginary bubble destined to burst. And when that happens, the scenes die too. This creates a scene without a future, a scene that very few are willing to commit to, a scene that only withstands on life support.
Alongside this pretty pessimistic perspective of the alternative scene's prospective future comes another dilemma. Although there are people like Porta Nigra and others, they likewise fight the same problems as the very artists themselves - age, life, work, children; it's only a matter of time before they fail and disappear like the rest of us, without anyone coming from behind to fill the void. And despite the existence of brilliant bands and organizers, it's become a common fact that concerts are no longer organized for the sake of commitment, but exclusively for the motive of profit. No profit, no concert. And this becomes increasingly obvious when the clubs no longer want risky acts that aren't automatically destined for vast profits to rent the club. It's better to have a plain disco than a strange concert. It's a catch 22 and I think we are losing the war.
Back in 2012/2013, we were cancelled six times out of six all across Europe because there were not enough presales. And operating in a scene/environment where people don't buy presales, it's virtually impossible to win. So yes, things have changed, and they won't be the same again.

Can you tell us more about your experience of touring in China last year? Was it a cultural shock or surprisingly the same as in every other country’?
China was definitely not the same as every other country, that's not an understatement. China was exhilarating and vivid, enormously vast and unexploited. It was a journey of a lifetime, the first of many, I hope.
We had five shows from Beijing to Chengdu to Hangzhou to Changsha and finally Guangzhou. An extensive journey of 5350 kilometers altogether with between 150-350 people per concert, which exceeded my wildest dreams. The food was absolutely stunning. Even the smallest most insignificant restaurant served better food than any so called "Chinese" restaurant I have ever visited anywhere else. Traffic is insane, preposterous and absurd.
China is absolutely amazing and we learned a lot. I hope it was only the first time of many more to come, and not just the first and the last.

Why did the release of your new album take much longer than expected?
I'd say that the primary reason for the upcoming CD being continuously delayed is because of my trip to Africa with Doctors Without Borders. Saving all those lives took more time than I expected. And for that I am sorry. But I suppose that there were also other matters interfering with the creative process, like having a second child, parenting, work, relocating to another part of Sweden, and life in general. But still, Africa is to blame.

As you say on your Facebook page, the long wait is over. The first life signs of Vision:Libertine part I are there. Can you tell us what we can expect to have “in a bedroom near you”?
A new and improved Ordo Rosarius Equilibrio, more skillfully managing to merge the old and the new. A darker work, more ritualistic, introvert, and contemplative, somewhere between Conquest, Love & Self-Perseverance and Songs 4 Hate & Devotion.

When can we expect the first songs online?
Probably around Walpurgis as that is when I intend to have the new material out.

If we read the line “in a bedroom near you”, we don’t expect a big change in the way you approach the lyrics or is there (again) more that meets the eye? Can you tell us more about the theme behind the new album?
Isn't there always a lot more to Ordo Rosarius Equilibrio than what meets the eye? I think there is; plenty more. Only because I sing about flesh and inner fires, doesn't necessarily mean that that is the incentive I aspire to convey onto the listener. Vision Libertine, what does it mean to you? What does it suggest? What visions manifest inside you as you dissect the theme? That is much more important and interesting than any meaning I am willing to give you.

In your message on Facebook, you promise at least two new Ordo Rosarius Equilibrio albums this year. Tell us more! If it’s Vision:Libertine part II ,why don’t you release it as a double album?
I hate double albums, LPs as well as CDs. Overly priced, but still to cheap to cover the actual postage for the excessively heavy release. And still every listener decides which cd or vinyl is better than the other, and only listens to one although there are two in the release. But yes, Vision Libertine is due, and instead of releasing it as two individual CDs which was my intention, it will be released as a double cd at the end of April.

Although it has been silent for a while, you have been very busy, because you promised - at least - one new album of TriORE as well. Can you tell us more about that album? When can we expect it, what will be the theme and will there be a different or the same approach to the music?
As I always say, expectation always leads to disappointment, so don't expect anything but the best. TriORE is more skillfully accomplished. Better production with live instruments and more maturity. Playing more with all that is gay.

Porta Nigra is a bit like a small Cold Meat Industry meeting. How do you look back on your Cold Meat Industry days?
A very small Cold Meat Industry gathering, I would say. But why not, Cold Meat Industry was important and made an impact. Some bands are still active and when they are not drunk, they evidently succeed in making damn good music.
I miss the old days from time to time, and I don't regret anything. It was a wonderful and important time between 96 and 05, after 05 everything started to crumble, and although it's unfortunate what happened, it was seemingly inevitable. I cherish those years and friendships that were established, the comradeship that followed and the tours we did together, but life is life and change is inevitable.

For all our readers & for your fans: will the new CD and new merchandise be available at the shows in Belgium and the Netherlands?
No, they won't. Because of Doctors Without Borders everyone is forced to be patient till the end of April.

ELVYA DULCIMER • Our next challenge is to perform live as powerful as on the CD.
FORGOTTEN SUNRISE • 'It's nice to do something on stage when you don't really know what happens next'
OAKTREE • It is my goal to find some peace in the things I do, I am not interested in having a blitz career.
DOGANOV • Doganov has the tendency NOT to listen to others...
INNERWOUD • I like the fact that the music appeals to very diverse audiences, both heavy metal and drone-oriented fans and people who tend towards classical or minimalist music, but also people who have never heard it before.
ROSARUBEA • We will experience our performance at Black Easter with deep involvement and care.
SPOIL ENGINE • We did not want to be just another female fronted metalcore band.
CANTERRA • You don’t have to think long when you get the chance to support Lacrimosa.
KONER • We want to spread our own sound. It will be a long road, and it certainly won’t be easy, but we want it!
DAS ICH • Basically even a home concert in your living room can be the most beautiful experience as long as you have the feeling that your music draws a direct line of nonverbal understanding between you and the audience.