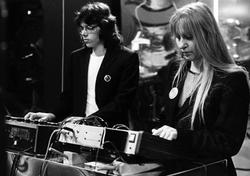 We had very little money at that time. I had been playing guitar a long time before Schaltkreis and owned some effects. The first thing that Stella and I bought together was the Roland Space Echo RE-201 that I still have

Everbody knows you from the "Psychotron" Album, as well as the "Sex is Out, Ich bin geklont" 7. How would you describe your music from that period of time?

You could call it cyberpunk, electronic rock or just experimental electronic music. In Italy they called it Cosmic and today it would be minimal synth. Actually PSYCHOTRON contains quite a number of different styles. The last part of the "Psychotron" song for instance could be regarded as a forerunner to Goa / psyTrance with its fast tempo and its driving sequencers. "Schwerkraft" is a kind of melancholic piece with a mathematical harmony structure. "Spaced Out" is purely experimental sound tweaking on the ARP 2600 while "Mutanten" is an electronic pop song with tongue-in-cheek lyrics about mutants dancing and defying gravity. "Weltraum-Boogie" is an electronic pop song with a very unusual 5/4 metric that most people don't even notice. "Lux" has been a soundtrack to an experimental typographic movie.

We had very little money at that time. I had been playing guitar a long time before Schaltkreis and owned some effects. The first thing that Stella and I bought together was the Roland Space Echo RE-201 that I still have. Then came the ARP 2600 that we received from the Swiss distributor and only paid much later. We then started to do soundtracks for all kinds of videos and with all the money we earned we bought new stuff. At the time of Psychotron we had the ARP 2600, the ARP Avatar guitar synth (that never really worked for the guitar), a Roland 100M modular system and a Prophet V. All this equipment is still or again in use except the Prophet that seems impossible to repair. We then had a Roland MC4 MicroComposer as the central sequencer - very clumsy to program but it worked. So we just took what equipment we had, experimented and tried to make the best of it. At that time we were quite into LSD, we were also friends with Albert Hofmann who visited us from time to time in our studio. We often had psychedelic sessions in the studio, every weekend for quite some time.
So all in all you could call it early psychedelic electronic music.

These releases on vinyl date back from the early 80ies, 1981 and 1982 to be more precise. Since then there were no more releases by SW, what happened?

Basically the usual music business frustration story. PSYCHOTRON was first released on the prestigious Mercury label but from the Swiss branch of the major that is now Universal. The other countries weren't interested in anything that came out of Switzerland and the Swiss company immediately lost interest, too. Then we re-released it on our own Space Records label, distributed by a Dutch company. We never saw a cent from the sales instead they sent us an invoice for pressing the records. At least we heard from traveling friends that they had seen the album in San Francisco, Tokyo and Moscow. In England it got to Nr. 5 on the synth charts of Melody Maker but nothing happened. There was no internet at that time so we didn't know that we were hugely successful in the Italian cosmic scene. Especially Stella found this lack of resonance hard to handle.

Later we leased a Fairlight, the first musical sampling computer, and it nearly ruined us financially. But we happened to have a big hit in Switzerland and some other countries with MUH! under the project name of Matterhorn Project. This was the first time we earned a little bit of money with our own records and so we stuck to this project for a while. But it also moved us to a much more commercial style and we later regretted that very much because it destroyed our image as psychedelic electronic pioneers.

SW still plays music but it has evolved quite a bit as nowadays you play a different kind of music. Could you tell us a little bit more about it?

Only in 2003 we really got aware of Schaltkreis again when Swiss/American DJ Alex Gloor (In Flagranti) came to visit us in our studio and told us about the status that Schaltkreis had in Italy, the US and many other parts of the world. We had no idea of that. He urged us to re-release PSYCHOTRON as a CD. First I didn't like the idea as I'm always busy with new musical discoveries but finally I did it and it set off a revival that's only getting real momentum now. Thanks, Alex!

Sadly Stella died in 2011 of cancer and also many years before she had kind of lost interest in life and in music, too. She had always been the one who said that Schaltkreis was the best that we had done together and that it was a pity that we hadn't done more live work with Schaltkreis (at the time we weren't able technologically to bring our sound to the stage). So in 2008 I thought I could cheer her up by writing new Schaltkreis material and taking it live. In the last 10 to 15 years I had been getting into the guitar again, especially as I had discovered the Roland VG-99 guitar synth. So I didn't write just electronic music, I wanted to play guitar live. Stella was singing with her wonderful and very special voice and the she was also playing the Kaossillator and some effects. I created in-depth visuals for the whole repertoire. We had a series of concerts in Switzerland, Athens and in Ibiza, some of them triumphant, but Stella always said that this wasn't the real Schaltkreis, she just didn't like the guitar. In 2010 she didn't want to go on stage any more and then some months later she died. These were the saddest years of my life.

When Janis Nowatzki of Private Records, Berlin, re-released PSYCHOTRON on vinyl in 2012, after the release party he took me to a friend who had a 2600 and we started jamming. This really got me back on track again with the old analog synths as I realised that I was still completely familiar with them. I started to clean and repair them all - this process is still going on - and reconnect them into the studio that had otherwise gone mostly digital. So now I have a couple of new tracks that are done with my old synths and I like it a lot.

Last year Private Records re-released the "Psychotron" Album. We love that album, but why should people buy it?

When we first released the album in 82 I wasn't really satisfied with it. To me it was just a collection of experiments and explorations we had done and I would have liked something more of a concept album. But today I think it's quite coherent and I always like to hear it. It's a fascinating document of the time and the psychedelics we were using. Musically it's interesting and diverse and the recording quality is astonishingly good in regard to the amateur and semi-professional equipment we had to use. I remember that I always had to fight hiss and distortion. With some proper management at that time the album would have become a hit and Schaltkreis a household name...

From my early days I had been a big fan of Science Fiction and so I was familiar with the concept of cloning. The title is about a future where human replication only occurs by cloning and sex is completely out. Of course this was ironic because the sex drive is so strong in humans that it will hardly ever be out.

You're gonna play a unique 1st time show in Antwerp on 24th of October at Bar Nadar. What can people expect that evening?

Currently I have three live acts:
• My chillout live show with visuals by Asteriza and with two dancers when we perform in Ibiza. I have an album finished that's ready for release.
http://pjwassermann.com/pjw_chill.html

• And Schaltkreis Wassermann which is basically the oldest but onstage the youngest. I had the first performance of the new Schaltkreis Wassermann in Berlin last year and that was an extended DJ act where I creatively toyed with the old released and unreleased material. I'll do this also in Antwerpen but I'll bring along some analog synths (a Mopho, an MFB synth lite and an ARP Odyssey). I've been playing around with them quite a bit and trying to integrate them live which is not all that easy.
So the Antwerpen concert marks the beginning of a completely new live presence by Schaltkreis Wassermann and I'll certainly keep working on it and develop it further. A new analog album is already on its way, too.
http://pjwassermann.com/pjw_skw.html
http://www.schaltkreiswassermann.com
https://www.facebook.com/pages/Schaltkreis-Wassermann/93774101078

Thanks a lot for the Interview and success with the concert !
Thanks for the invitation and interview!

PHOSPHOR • Our name reflects the kind of darkness that we make, but also the light that we bring to people's lives...
XIU • I'm still shy and introvert but I try to be more open during performances, and actually it comes naturally with more practice
CYFERDYNE • if Neuroticfish asked us to put something together, we definitely wouldn’t say no. We’re such huge fans!!!
LISA MORGENSTERN • I also sing about nicer topics when they overwhelm me, but mostly they don't.
CHAINREACTOR • There is hardly another project besides Chainreactor which fulfills the fusion of hard techno with elements of dark electro and presents the most explosive mixture!
AUTOMELODI • The definition of “coldness” in music is a very debatable one...
THE KVB • We love Belgium, its culture and especially the beer! It's the best in the whole world!
SIXTH JUNE • Music opens certain sources of myself, and probably its mostly melancholy and darkness than some other emotions.
32CRASH VERSUS IMPLANT • Nothing is impossible!
LESCURE 13 • The plan is to release something, but which format, content etc is still unknown.