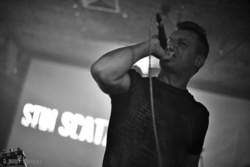 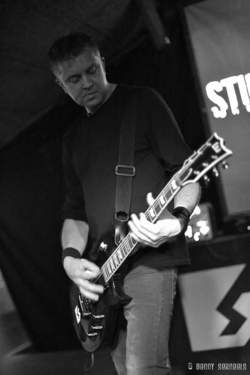 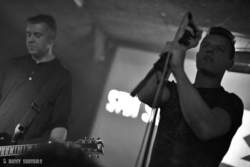 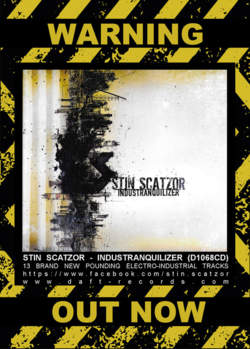 I never could have thought Stin Scatzor would ever release an album on DAFT Records!

Hello there gentlemen, finally a new album! If we do not count the Industremakes (2014) and the Industruction EP (2007), it's been a while since you released a full studio album. If I am not mistaken, then the last studio album, Industrogression (2003), was almost 15 years ago. What's to blame for that gap according to you both?

Stefan Bens: As we are always experimenting with new instruments / sounds it seemed at the time interesting to give some old song a makeover. Because most of the sequencing was still on PC and / or paper, it was easy to work out the older songs first. Hence the album "Industremakes". The 3" EP was released in-between due to the fact that we were without a label and were pretty eager to release something, so we released this limited disc, in terms of cost that was not so bad...

Kris Peeters: I think "Industrogression" was more of a try-out, even though there are songs from that album we still perform live. After the first album we made together, we have also tried to find other ways to work on the songs together, maybe that is why. We also made plenty of remixes and remakes for other bands during the period of "Industremakes". Despite the fact that in recent years a lot has happened in my personal life, "Industranquilizer" was produced faster then I could have hoped for. Maybe it was an extra outlet and therefore sounds more intense than the previous releases.

You seem to like and hold on to the title variations on Industrial? Why this obsession?

S: It’s not really an obsession but rather fun to play with the word "industro". "Industro" was the title of the first official release that was released by Ant-Zen and because I had "invented" the word more or less... (to describe the music of Stin Scatzor I had combined the words "industrial" and "electro", therefore...)

K: And of course, we always have a beginning for a new album. ☺

Can we say the number US of A. is a kind of protest song versus the current political situation and president? Or what is this song about?

S: Everyone can take and understand it as they want and probably everybody thinks this is about the United States... but no, the United States of America are not even mentioned. They are just other words that start with a U, aa S and an A! :-)

Stefan, you roar the lungs out of your body, both on this album and during your live performances, are you really mad at this world, or is all not so bad? Why are you angry?

S: With this kind of music, it may all be a bit more harsher and yes, it is a kind of outlet, both on the albums as when we perform live but not that I am an aggressive guy, on the contrary. Honestly, you do not get me angry so easily. The same goes when I practice with my other hobby: as a goalkeeper I can also scream loudly at the others during the match but just like after a concert, we drink some beers after the game and all is forgotten and forgiven! :-)

K: When we teamed up, our common favourite bands were bands like Cubanate, Peace Love And Pitbulls, etc … and thus we continued making music in that style.

You already have made releases on different labels, how did you end up at Daft Records this time?

S: It was actually Dirk Ivens who came to us and asked us if we weren’t recording new songs. Of course we were trying out and recording new things but because of that conversation everything actually gained momentum. The songs still needed mastering, the lay-out had still to be worked out and we even had to compose a new song in order to deliver a firm full-length album. In the end everything was approved by Dirk and, voila, "Industranquilizer" was unleashed on mankind!

K: Honestly, I had never could have thought that Stin Scatzor would ever release an album on DAFT Records; but on the other hand, Dirk has always been around as long as I remember making music.

Why did you choose to work through a label again and not to follow the current DIY trend?

S: Well, I think a label can offer more possibilities in terms of distribution. Plus a label probably has more finances to do decent publicity, which you do not really have if you do everything yourself. We still have some copies of the MCD in stock because we did not really have a distribution for that one. So people can still buy this one at one of our performances...

K: It is also a form of recognition, today everyone can release an home-made album.

For a number of releases you've always worked together with the same designer for your artwork? Can you tell us more about him and how you ended up with him?

S: If I remember correctly, we got to know User.dx through Johan Van Roy. vHe connected us with him, while he also sometimes makes the artwork for Suicide Commando. In the meantime, he already knows very well how we like our layout to look. Despite our 4th collaboration with him, we only met him this year, for the first time, in Leipzig.

There is also a cover on this album, Backfire. In contrast to most bands you decided to take a song from the relatively unknown band Animassacre from Bulgaria. How did you get to them and why did you just choose this particular track?

S: We once made a remake of that the song for a release of an Animassacre album. Simeon Dotkov even thought our remake was even better than the original. Since we play it occasionally live, we felt that we had to do something with this track. Thanks to Animassacre's permission, we were able to use it for our new album.

That one does not get rich of this type of music will not surprise anyone so where do you get the enthusiasm and perseverance to keep this thing going?

S: Maybe because for me, it is just like a hobby that gets a little out of control sometimes? It is not an obligation and this makes it all a little more pleasant. I do not have to compose new tracks if I don’t want to, I have no obligations to a label. If we can recover some of the costs we make we are already happy.

K: It is also the musical freedom to do what you want, within the limits of Stin Scatzor of course. ☺ Maybe that's why we also have a bit of our own sound. The feedback of the audience to our performances are also predominantly positive, which always gives us the courage and energy to continue.

Some prominent artists in the genre, such as Front 242 and The Sisters Of Mercy have recently stated recording a new album is no longer profitable in these times. For example, the recording costs would be too high in relation to the sales figures. What is your opinion about this?

S: I think so too, if you see what we put into our music and what we get out of it... on the other hand, for us money is not issue, we do not have to live from it. I do not think that many CDs are sold anymore these days. Have they recently not said it on the radio? Streaming has caught up with CD sales? And then we are not even talking about the illegal downloads...

K: Of course I can not do the accounting for those groups but I think by occasionally releasing something new, they would please many of their fans. Of course it's also not easy to compete with the nostalgic values ​​of their older songs.

What musical dreams would you like to see come true in the future?

S: No idea actually. Never thought about it. Fill an arena? :-)

MANINKARI • ‘Sound Has Also A Place In A Process Of Spiritual Healing’
IRKLIS • ‘INDUSTRIAL MUSIC WAS NEVER MADE TO PLEASE ANYBODY’
PSY'AVIAH • 'For me, music was important, because I can lose myself in it and find comfort in it.'
LACRIMOSA • When I made ‘Testimonium’ I was kind of in trance.
SOFT RIOT • Jack Duckworth talks about Soft Riot
TREPONEM PAL • ‘SOBRIETY, POWER AND ORIGINALITY’
ELEKTROSTAUB • 'I think it will be almost impossible to combine all the artists into one single concept.'
DIE FORM • I would like to be optimistic and positive, but the world seems to move inexorably/blindly towards a sombre future, towards chaos.
KIM LARSEN (: OF THE WAND AND THE MOON:) • Symbols still carry personal meaning to me.
DONDER, HEL & HAGEL • Thunder, Hell & Hail!!! You bunch of fresh water pirates!!!

Other reviews from STIN SCATZOR
STIN SCATZOR • Our set on Eurorock will be short, but SOLID.
STIN SCATZOR • Let's hope it's not going to be the last “resurrection”!!!
STIN SCATZOR • Highlights were when we played abroad , the low ones ? Too much to mention ! :-)