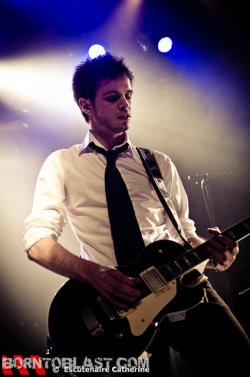 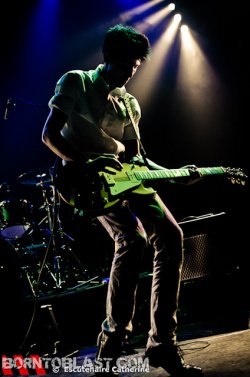 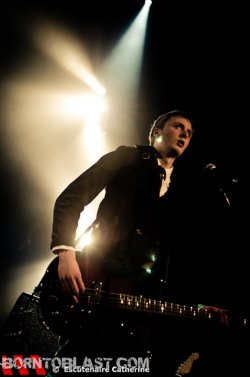 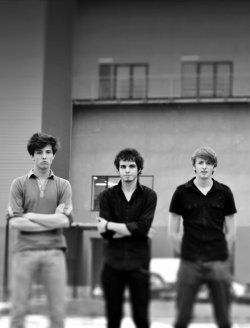 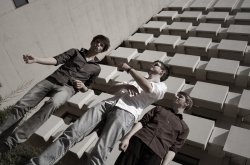 I don’t know if we really play post-punk but anyways we try to keep the movement’s spirit.

One of the most promising young bands from Belgium must be Thieves Of Silence. They’re not that well known (shame on you, Belgian press!) but those who have heard them or have seen them all say the same thing : this is post-punk like it should be. A tight sound with melodic 80’s keyboards and...better than all the neo-post-punk-bands that are just created to afford a swimming pool.
After opening for De Brassers and Gang Of Four these three young men are on at Shadowplay festival.

Well hello for those who don’t know : who are Thieves Of Silence

Well, Thieves Of Silence is a band which was born a little more than a year ago. We are three young men from Brussels in love with the 80’s. We try to make a dry, grey and efficient music. Pablo plays the guitar, Quentin the bass, Paul sings and plays the guitar and Ponce Pilate sticks to being our drum machine.

I followed your footsteps if I may say so and I see you guys just getting bigger and bigger. I guess you’re quite satisfied with it.

Certainly ! We’ve had exceptional opportunities this year ! We shared the bill with bands like Gang Of Four or De Brassers and we played in France several times (Bunker Bal). We were far from picturing this all just a year ago !

When you were starting up, did you ever thought it would be like this?

Certainly not ! To be honest when we started we didn’t ask ourselves too many questions about the future. We were focusing on our songs and we rehearsed a lot for the upcoming concerts we had at the time.

So far you played with post-punkicons like Gang Of Four or de Brassers. I guess that’s no coincidence at all…

No, I guess not. Considering we are among the very few bands in Belgium influenced by this type of music. I suppose it was easier for the organizers to choose an opening act like Thieves of Silence rather than Customs ! And it’s cheaper(laughs)!

In fact, do you think you play post-punk?

I don’t know if we really play Post-punk but anyway we try to keep the movement’s spirit. We try to be honest and we don’t take ourselves too seriously. Furthermore, we’re no technical musicians so our music sounds rather straightforward like punk could sound by the end of the 70’s.

A question everybody seem to ask is of course: when will there be an album?

As soon as possible ! For now we are looking for a label which would suit us the best. We’ve sent our music to several of them which interested us. As soon as we’ll receive a positive answer, we’ll jump into the studio!

You’re a young band but one of the few who really do capture that 80’s-sound. It makes you wonder how you manage this.

We use quite a lot of keyboards and above all, a drum machine. It was very common back then to use an LM-1, or a DMX, or a TR-808. Lots of rhythms from the 80’s were created on those drum machines, like Alice (Sisters of Mercy) or Blue Monday. On the other hand we use lots of effects on the guitars and the bass is emphasized, which is very characteristic of the 80’s

Once you had the stupid (sorry) idea to change your name but you kept it to Thieves Of Silence? Why was there need doing this?

Actually, Thieves Of Silence had at first a different line-up. We had a drummer and Paul wasn’t in the band yet. It seemed normal to give him the right to express himself once he joined the band. The spirit of the band is not the same since then. We’re not sure to release the first album under that name. It will depend of the current state of mind.

We thought about inviting Eddie from Iron Maiden and using a giant setting of rainbows and unicorns (laugh). Seriously, you can expect several new songs and a VJ set.

PAUL : Crocodiles/ Heaven up here/ Porcupine (Echo And The Bunnymen)

PABLO : Virus Meadow, And Also The Trees / Within The Realm Of A Dying Sun, Dead Can Dance

QUENTIN : If I have to take one it rather will be Power, Corruptions and Lies by New Order, The Queen Is Dead by The Smiths or Heroes from David Bowie.

PABLO : Siouxsie Sioux back in 1980, to discuss about Kaleidoscope of course :o)

KEEP CALM AND CARRY ON!

Pablo : The Joke by Milan Kundera

CRANES • We’re not really the same people we were 20 years ago, so we wouldn’t write the same kind of things now.
CLAN OF XYMOX • I am not really an optimist but try to ignore my thoughts successfully most of the time.
IKON • Mick Mercer called IKON “the quiet achievers” and I think that sums us up
ERATO • As Sinatra sings : regrets we had a few, but then again too few to mention...
BLOODY, DEAD AND SEXY • Thank God, that we haven't fulfilled all our dreams. If your dreams ever fulfilled, your dreams are definitely too small.
BUZZ • I've always insisted on not having a French sound, even though 99% of the lyrics are in French…
WIM PAUWELS • 5 YEARS OF SILKEN TOFU | I don't care about the crisis, it's as simple as that. I believe that good music will always survive, even if the audience for it is small.
HOCICO • In terms of attitude I think we are a punk band.
IN THE NURSERY • Every individual has the power to create, it is the lack of ideas that can sometimes hinder people.
TYING TIFFANY • It's not easy to describe my sound because it's a mixture of what I feel inside every single day.