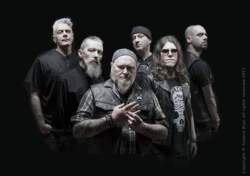 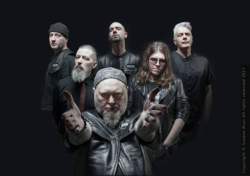 Set up in the 80s French pioneers of industrial-metal music Treponem Pal last year celebrated their 30th anniversary. They released the album “Rockers’ Vibes” on Juste Une Trace, which features a few new songs and multiple cover versions. The common element between all the songs is the power emerging from the writing, which became the band’s trademark. I got in touch with the band’s legendary front man Marco Neves.


Back in the 80s you were one of the pioneers dealing with a ‘new’ kind of metal music. What did you keep in mind from this early period and ‘movement’ and how much from the early Treponem Pal do you still recognize in your new songs?

Speaking for myself and without any pretention I think our first album still makes sense. We’re still playing live “In Out” and “Silico”. We’ve been precursors of what people commonly call ‘industrial-metal’. Years have passed but we always moved on composing original and powerful songs featuring a somber atmosphere. I think we can speak about a steamroller. There’s a real strong link between all of our albums, which can be outlined as ‘sobriety’, ‘power’ and ‘originality’.

On “Rockers’ Vibes” you’ll find the song “Silico’s Return”, which clearly is a wink to the original version of “Silico” featured at our debut album. We also featured ideas we elaborated on our last four albums and, which didn’t appear on the first three albums.


Treponem Pal went through numerous line-up changes, members also started side-projects so new Treponem Pal productions were released on an irregular basis. What has been the impact of all these changes and activities on the band, the sound and maybe your fans?

Despite of numerous line-up changes Treponem Pal has always had its core members. First there was Michel Bassin and myself. Next Didier Bréard and I went on. Together with Didier B. we also set up the successful reggae-dub side-project Elephant System. When we reactivated Treponem Pal in 2006 we met Polak who from that moment on contributed to all further writing, becoming a core member himself. The fans never stopped supporting the band.


You’ve worked with several great producers such as Franz Treichler (The Young Gods), Roli Mosimann (The Swans), Sascha Konietzko (KMFDM)… while the new album has been produced by Jipouille de St Loup. Who had the biggest impact on the sound of Treponem Pal and according to you what's ‘a good producer’?

According to me a great producer is one who respects the band’s opinion and simply uses his talent to serve the band. That’s precisely how it worked with Franz Treichler and Roli Mosiman. Our experience with Sacha Konietzko was a bit painful because we had to make him clear he was not producing a new album of KMFDM. It was tough working with him although the final result was exactly what we had in mind. But the best producer is without a shadow of a doubt Jipouille de St Loup. We have known each other for more or less 20 years now. He became a member of the band who on each song brings his own ideas while fully respecting our spirit and expectations. We’ll go on working together because he’s a talented producer who knows exactly how to create a ‘fat’ sound. He’s the band’s best friend and still like a brother. We share the same taste in music and that’s really important as you don’t lose time explaining a lot of things. It all comes naturally working with him.


Your new album “Rockers’Vibes” mainly features cover versions from very different artists. What I especially like is that the cover versions sound like they were originally composed by Treponem Pal! Tell us a bit more about this ‘concept’ and what about the new songs?

As the title of the album might indicate, it is a wink to different bands that have inspired us and other bands we grow up with. I like the enraged punk sound from Dead Boys as much as Lee Hazlewood’s crooner timbre of voice or even Don Fardon. The global atmosphere running through this work is quite diversified because of the new songs, reflecting the typical industrial-rock style of Treponem Pal at one side and the cover versions, which are more rock’n’roll with our personal trademark on top at the other side


Treponem Pal always has been a great live band. What makes it magic to play live and are there some places/concert areas you would like to ever play (again)?

Marco: Playing live is the most important thing to us because without live gigs Treponem Pal wouldn’t exist. We create a kind of steamhammer effect with the main aim to hit the audience with a knock out. We go on playing our most famous songs one after the other creating a real wave effect. The opening part of a live show is very important; it has to be strong and powerful, next becoming calmer, which is the right time to install a groove with our most successful song “Pushing You Too Far”. We next move back into power to finally reach the ultimate climax on “Excess And Overdrive”.

We don’t have favourite venues we want to play, but we like small halls where together with the audience you can feel the vibes. It’s exactly the same for festivals.


People often link music artists with ‘sex, drugs and rock’n’roll’. Lemmy Kilmister perfectly symbolized this statement, but what about Treponem Pal? Is it just a cliché? A way of life or philosophy? Or simply part of the music business?

It’s a way of life, just like with Lemmy. It’s all about a strong connection between the band members; first the band! ‘Sex, drugs and rock’n’roll’ is a true cliché we never stopped practicing all over the years.

ELEKTROSTAUB • 'I think it will be almost impossible to combine all the artists into one single concept.'
DIE FORM • I would like to be optimistic and positive, but the world seems to move inexorably/blindly towards a sombre future, towards chaos.
KIM LARSEN (: OF THE WAND AND THE MOON:) • Symbols still carry personal meaning to me.
DONDER, HEL & HAGEL • Thunder, Hell & Hail!!! You bunch of fresh water pirates!!!
LIVINGTOTEM • ‘INDUSTRIAL INFUSED ROMANTIC TECHNOID MUSIC’
MESH • Richard Silverthorn Of Mesh On “Gothic Meets Classic” And The “Live at Neues Gewandhaus Leipzig” Album
KMFDM • Sascha Konietzko Gives Us The Latest On KMFDM
NERVENBEISSER • ‘WE'RE DOING OUR THING AND WE'LL KEEP IT THAT WAY’
MILDREDA • 'It's is very nice feeling to let dark bombastic music hit an audience'
DER HIMMEL UBER BERLIN • ‘EVERYTHING IS FASCINATING IN DARKNESS’