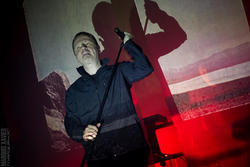 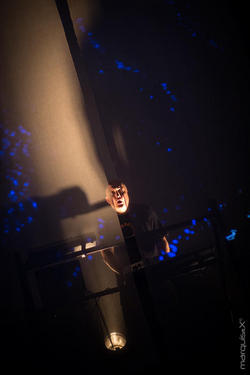 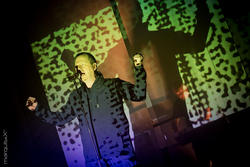 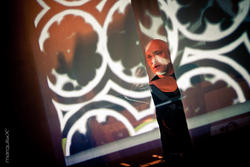 We did it the right way, those reflexes to not using presets and reading manuals are still our way of working as today. We were in our time, not ahead, but the audience was behind

Everybody knows Front 242, but only the real fans know that before there was Underviewer. As Underviewer will play again on stage in September (they only restarted a few years ago) it was time to get some answers and it's always to talk to people who have been raised in your own town (Jette for me) …

First of all why did you choose this name, what does it mean to you?

Patrick Codenys: Underviewer is not a real word but an association of words calling for curiosity, underground, looking under things, searching...

How hard was it to make this kind of music in '78 and get an audience? Did you play a lot in Ganshoren, Jette (where Jean-Luc and Richard grew up) … in small youth clubs (like you did with Front 242)?

PC: As a matter of fact, I am from Ganshoren-Jette as well; and at the time Jean-Luc and I were not only playing in youth clubs but also in people's living rooms. We would hook up our gear on the parents hi-fi and start a concert for 5-6 people sitting on the living room chairs. We believed in what we did so we did not care about the difficulties.

When you look back at it now don’t you get the feeling you were too much ahead of time (by not using the presets of the synths and by loosing 30 minutes because of reading the manual first, as synths back then where not really user friendly)?

PC: We did it the right way, those reflexes of not using presets and reading manuals are still our way of working today. We were in our time, not ahead, but the audience was behind.

How comes you restarted Underviewer and for those who missed the restart (or can I say reboot) when did it happen?

PC: There were two reasons for me to restart Underviewer; first on a personal point of view, I was looking for something reminding me my first feelings about electronic music, my first synth... what thrilled me initially. When I was still naive and clumsy. I enjoyed that time because it was authentic, like childhood. The other reason was more of a challenge because I was asked to present a project for a vintage evening at Botanique (Brussels). An event called: BodyFarm.

What happened to this other pre-Front 242 band called Prothese?

PC: I believe Daniel is still looking to release some new Prothese material.

How did the crowd react so far, isn't it sometimes a bit confusing?

PC: Yes, confusing... mainly because they don't know the tracks since we haven't released anything. But some bands like Absolute Body Control are in the same type of mood and have positive reactions; so we can hope for the better when we will release some songs.

What is the trouble about in the song ‘Trouble’?

PC: You should ask Jean-Luc... but on the musical side, it has a Factory records ambiance to me... and that time was emotionally important in my life. The trouble comes from the memories of those times.

JL : the trouble is comparisons, hesitations, things not being fully lived because of indecision and uncertainty.

You will play again during the Fantastique Night, how is your relationship with Fred Cotton and his venues?

PC: My first time at Fantastique Nights and Fred is a Fantastique guy; so I am sure it will be a great moment... I met Fred for an interview and we had a good vibe, that's all.

JL : I think that, just as me, anyone enjoying the 'dark alternative culture' should be grateful to Frédéric and his team to have persistently kept in the past and to keep this scene alive in Brussels today. As an artist I can say that working with him has always been fair and easy and that, more generally, not many words were required to feel tuned on the same wavelength. He's into the same type of music I'm into but knows much more than I do in that sector, and he always has interesting stories to tell.

I read that you had some troubles with Houston for example. I read the same kind of story from Haggard when they had to play in Portugal. Does it happen a lot? What’s the worst story that happened to you?

PC: With Front242, we were screwed by a "fake" promoter who sold tickets for a show that was never going to happen. Since then we might play Houston anyway next year. Worst story? Having to do a playback with 242 - we did only two in our lives.

You will play the complete ‘Geography’ album as promo for the reissue? What else can the fans expect?

PC: We did a one off show in Aarschot three years ago... that's all folks !

How did the creation of Geography work? You started everything in a tiny single room of a house in Jette?

PC: This is a long story but shortly said, Jean-Luc and I were taking the train every day for a year, after work, to join Daniel in Aarschot. We all had a few synths but Daniel had a small 4 tracks studio. It was a hard time and we needed a lot of strength to do this. The "studio" was a 4x3 meter room with a recorder, a small mixing desk, one reverb audio-pulse and 4-5 synths. All by hand and notes (no memory for the sequencers and sounds on synths). Once it was recorded, all sounds were gone.

Can you tell us more about it. Why did you change the name from Underviewer to Front 242?

PC: Underviewer was our band (Jean-Luc and I) and Daniel had already released a single under the name Front 242. We met Daniel to record the first Underviewer single in his studio because he had some recording gear. Then he asked us to help him on the 2nd Front242 single and we made 'U-men' together which was such a success that we never released anything of Underviewer. Later we started 'Geography' together...

When I listen to your live sets so far the sound is really more like back then, whilst when you play with Front 242 it’s more like the songs get an upgrade/update. What is creating the most fun: bringing it in its original form or try to get it to sound like 2013?

PC: Most of the tracks kept their original sequences but some new analogic sounds were added like with Front 242. The difference is that Underviewer wants to keep the spirit of the time... pure, naive and simple.

Somehow I feel like you both need to do some side-project from time to time and that you don’t keep them for long, almost like a chameleon, how do you feel it?

Who decides about the visuals during your gigs with Underviewer? Who creates them and what inspires you?

PC: We did some ourselves but some were made by Etienne Auger (who does 242 clips), Didier Volckaert (cineast, 80's fan) and Geoffroy DeVolder (Videast)... the idea again is to keep it lo-tech like in the 80's. Basic sequences of images that trigger your imagination like some of the 242 covers.

Do you think there could be some new material coming up from Underviewer?

PC: Working on it.

A specific question for Jean-Luc: with your moving to Germany, will it open more doors for you all if you want to play more in Germany?

J-L: At least if we play in Germany I will have shorter distances to travel.

Some last words for the fans?

PC: Lets enjoy a simple and emotional electronic music... where man and machine embrace each other.

Thx a lot! I appreciate it very much!

here is the review of the gig:

DJ DE THANNBERG • I'm making sure that I can spin whatever you guys request!
ORANGE.SECTOR • Für immer... kalt wie Stahl!
PANKOW • I crap, you crap, he/she craps, we crap, you crap, they crap. It is all crap.
JäGER 90 • We will clean our boots and it is sweat.
BRAIN SEKTOR • WEEE gonna kick your ass!!!
GRANDCHAOS • Everything is really a question of authenticity and friendship in this movement.
STEPHANE FROIDCOEUR (SIDE-LINE MAGAZINE / NEBULA-H) • It’s crazy to see what the power of simply being a little bit famous can do with people and their entourage.
DUCHAMP • Music can be such a powerful way to connect people and I am beginning to understand this more and more
THE ARCH • Yes, we are ambitious, we have to be. Otherwise there is no point continuing.
DIORAMA • We have built a certain niche, which has advantages and disadvantages