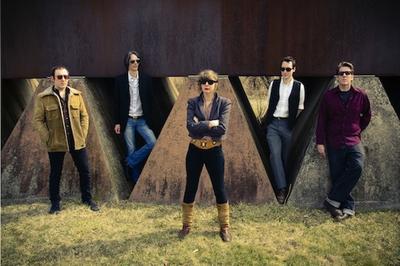 Living legends on Baltimore’s thriving music scene, CELEBRATION return with Albumin, a seismic slice of psychedelic rock'n'soul, which will be released 18th August on Bella Union.

The first single to be released from the abum is ‘Tomorrow’s Here Today’, the extraordiary video of which features a troop of interpretive dancers doused in black powder and paint resembling arty alien ninjas.

Albumin is the band’s first album since 2010’s acclaimed Electric Tarot: Hello Paradise, and their first for Bella Union, initiating a new chapter in a story marked by triumph and disaster, struggle and redemption. Albumin is also Celebration’s finest record to date, the album the quintet has been leading up to. From the anthemic opener ‘Razor’s Edge’ to the pop levity of ‘Tomorrow’s Here Today’ and the shape-shifting centrepiece ‘I Got Sol’, these are their strongest melodies, most dynamic arrangements and singer Katrina Ford’s most impassioned incantations, drawing on years of studio know-how and emotional ballast.

“It’s been a long journey,” recalls Ford, who with multi-instrumentalist (and husband) Sean Antanaitis and drummer David Bergander, formed Celebration in 2004. “We’ve all experienced a lot of life, toured a whole lot, had our ups and downs, and the music reflects that. It goes deeper now.”

Clearly something in Baltimore’s water supply has a slowly seeping effect. Following the recent breakthrough by another local favourite, Future Islands, it’s now Celebration’s turn to carry the torch for bands that only improve with age. This is partly down to the permanent addition of former collaborators Tony Drummond (keyboards, percussion, backing vocals) and Walker Teret (bass, guitar), whose creative input has had a galvanising impact on Albumin’s sweltering grooves. It’s a record that revels in tradition, such as the Sixties girl-group swing of ‘Blood Is The Brine’ and the southern rock base of ‘I Got Sol’, while the album’s spread of fabulously funky-chunky organ is a hallmark of vintage psychedelia, but the music’s art-punk ambition makes Celebration a distinctly 21st century entity.

Albumin will be released 18th August on Bella Union.