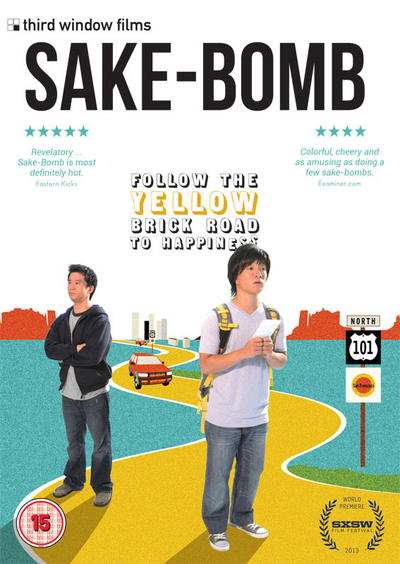 A “Sake-Bomb” is a cocktail created by dropping a shot of sake into a pint of beer. It’s also a comedic road movie about a sarcastic Asian American and his Japanese cousin.

Sebastian is a bitter, self-deprecating wannabe Internet star from Los Angeles. He has recently been dumped by his girlfriend and on the look-out for someone new. When his cousin Naoto, a naive sake maker from Japan, shows up to find his own ex-girlfriend, Sebastian takes him to north California to find her. They are a clash of cultures waiting to happen. Someone has to break first. Together they meet a colourful group of characters as they come to grips with who they are and the true nature of the girlfriends they are pursuing.

He was born and raised in Japan. He moved to the United States in 2000 to pursue his directing career. In Japan, Sakino produced and directed television programs. In the states, his directorial debut The Jazz Addict was an official selection for Crested Butte Film Festival. Soon after he attended California State University Long Beach’s film program where he went on to direct Vanity Mirror, The Spiral Ring and Orizuru. Vanity Mirror won the Grand Prize for UTB Picture Battle competition. Orizuru hit the worldwide film festival circuit in 2006 and received a generous handful of awards including the Hollywood International Film Festival award for Best Period Drama, the Best Screenplay award at the Media Arts Festival, Best Film at No Nuke Festival. The film was eventually aired on PBS. Currently, Sakino has been working in the commercial and film industry. He has also worked with acclaimed directors such Kazuaki Kiriya and Shunji Iwai. His credits include"Takamine", "Bandage", "Bokutachi no Playball", "Stolen", "Halfway", "Etienne!", etc.