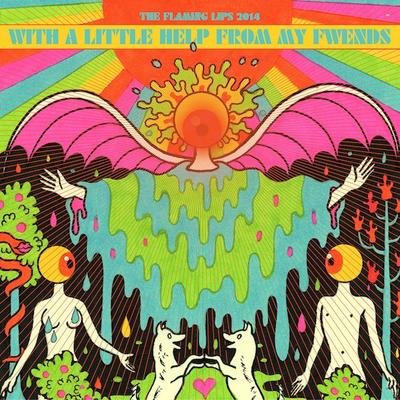 THE FLAMING LIPS have announced details about the track-listing and special guests featured on their upcoming Sgt. Pepper’s Lonely Hearts Club Band tribute album, With A Little Help From My Fwends, which is due 3rd November on Bella Union in the UK/Europe (28th October in the US on Warner Bros. Records). The band has recorded their own versions of each track on The Beatles’ 1967 classic in their own inimitable style, with help from special friends Miley Cyrus, Moby, My Morning Jacket, J. Mascis, Dr. Dog, Phantogram, Tegan and Sara, Grace Potter, Electric Würms (The Lips side project who recently released their 6-song debut album, Musik, Die Schwer Zu Twerk) and many others.

With A Little Help From My Fwends, is now available for pre-order at all participating retailers. Those who pre-order will receive a pair of instant downloads including “Lucy In The Sky With Diamonds,” featuring Miley Cyrus and Moby and “Fixing A Hole” featuring Electric Wurms.

All proceeds from sales of With A Little Help From My Fwends, will be donated to The Bella Foundation, a non-profit organization based in the band’s hometown of Oklahoma City that assists low-income, elderly, or terminally ill pet owners with the cost of veterinary care.

With A Little Help From My Fwends will be released 3rd November on Bella Union (28th October in the US on Warner Bros. Records). Album artwork and tracklisting below:

The track-listing for With A Little Help From My Fwends is as follows:

02. With A Little Help From My Friends

03. Lucy In The Sky With Diamonds

08. Within You Without You