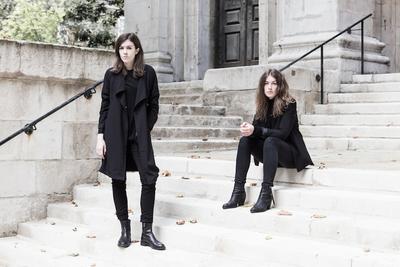 Following their triumphant return last November with second album "The Other I", sister duo 2:54 have premiered a visceral, gritty black and white promo video to accompany 'Crest', one of their rawest, punkiest, cuts to date. "We wanted to create a video that captured the energy of the song as well as our live show, and once again Charlie Robins, Chris Hugall and Daniel Castro have done an outstanding job of doing exactly that," says frontwoman Colette Thurlow. Watch it below...

The video comes just ahead of their highly-anticipated imminent UK headline dates, the band having just announced that they'll be joined for their London, Dingwalls show by special guests the Grumbling Fur, the acclaimed leftfield overlords who's debut album featured in a number of End of Year polls. After that the band will then be making their long-awaited return to the US for an extensive tour that takes them coast-to-coast alongside the much-loved Scots, Honeyblood

From the expansive, tempo-shifting opener ‘Orion’ and the pining roots of ‘The Monaco’ to the shape-shifting tour de force of ‘Raptor’, The Other I significantly widens the net beyond the achievements of 2:54’s self-titled debut. The Other I is all the stronger for Hannah and Colette’s hands-on approach to production while Colette’s lead vocals show a striking versatility. The Other I is out now on Bella Union.

"A finely crafted album that blurs the lines between shoegaze, indie pop and goth-rock, and is as assured as it is atmospheric… Like Bat For Lashes duelling with The Cure." Uncut – 8/10