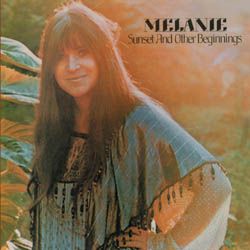 "Stoneground Words” was the first album in the UK to be released on her own label (Neighborhood Records) in 1972.

Regarded by many Melanie fans as her finest album.

The booklet includes all the photos that were part of the original album release.

Features two bonus tracks ‘Bitter Bad’ a 1973 single that was not featured on any album and ‘Seeds’ (Long Version) that includes her recitation of the ‘Gather Me’ Poem.

All songs were written by Melanie with the exception of ‘My Rainbow Race’ which is a Pete Seeger song.

Singles taken from the album were ‘Together Alone’ and ‘Do You Believe’.

UK music publication Melody Maker hailed this album as "the most sophisticated she’s made”.

2. BETWEEN THE ROAD SIGNS

8. SONG OF THE SOUTH

"Madrugada” (Portuguese for Daybreak) was a 1974 release on Neighborhood Records.

Melanie was already known as a great songwriter and this album highlighted the fact that she was also a brilliant interpreter of other people’s songs. So along with six originals by Melanie we also have ‘Lover’s Cross’ (Jim Croce),‘Pretty Boy Floyd’ (Woody Guthrie), ‘Wild Horses’ (Jagger/Richards), ‘I Think It’s Going to Rain Today’ (Randy Newman) and ‘Will You Love Me Tomorrow’ (Goffin/King).

Includes the Bonus Track ‘I Am Being Guided’ which was not available on the UK release.

Singles taken from the album were ‘Will You Love Me Tomorrow’ a UK Top 40 Hit, ‘Love To Lose Again’ and ‘Lover’s Cross’.

The critics raved: "Madrugada contains a flawless rendering of Jim Croce’s ‘Lover’s Cross’ and is easily her most acclaimed album to date”.

"Melanie is at her best.. innovative and captivating”.

6. WILL YOU LOVE ME TOMORROW

7. MAYBE NOT FOR A LIFETIME

"As I See It Now” was a 1974 release on Neighborhood Records.

The bonus track ‘La Bamba’ is a rarity that was only released in Italy as a single.

The album features a host of great backing musicians including Mike Heron and Robin Williamson of The Incredible String Band.

Singles taken from the album were ‘Sweet Misery’ and ‘You’re Not A Bad Ghost, Just An Old Song’.

"Sunset And Other Beginnings” was a 1975 release on Neighborhood Records.

On her renditions of ‘Almost Like Being In Love’ and ‘Ol’ Man River’ rock critic Jack Kelly said "she lifts them bodily out of cliché corner with treatments so different and apt it makes you wonder why someone didn’t see the possibilities long before Melanie did”.

The bonus track ‘Beautiful People’ was recorded live at The Royal Albert Hall, London on 6th October 1975. It was released originally as the B Side to the ‘Almost Like Being In Love’ single.

5. PEOPLE ARE JUST GETTING READY

7. I’VE GOT MY MOJO WORKING

9. DREAM SELLER (MEET ME ON THE CORNER)