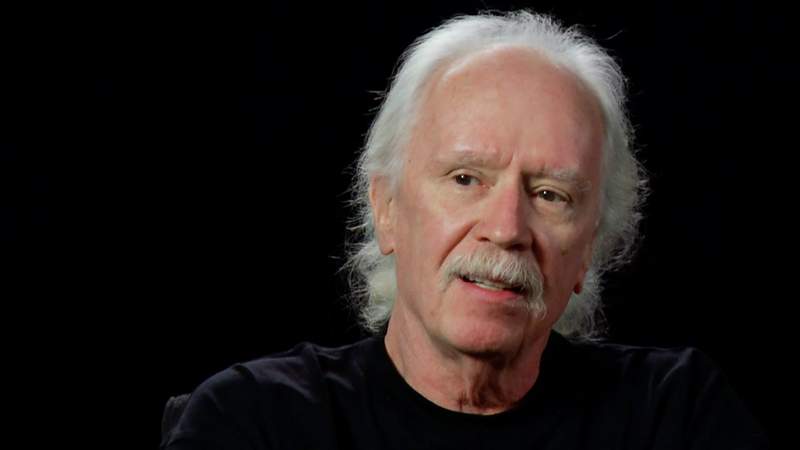 Much of the power of the best films by the cult director John Carpenter can be attributed to their use of music — music that, more often than not, was composed and performed by Carpenter himself. What began as a necessity for the low-budget productions by Carpenter became a major part of his aesthetic, and established him as a pioneering figure in genre- film score work as well as electronic music in general. Now, flanked by his son Cody Carpenter and godson Daniel Davies, and with two albums (Lost Themes and Lost Themes II) of non-soundtrack material under his belt, Carpenter has decided to revisit some of his most beloved themes.

Halloween was Carpenter’s breakthrough as a feature film director. Made for $300,000, it was the most profitable independent movie of its day, and to date has spawned several sequels, becoming an renowned franchise; its stories, characters and scores known the world over. The film’s pulse is the eerie 5/4 piano theme that Carpenter places at the center of its pivotal scenes. It’s a classic theme that stands tall alongside Psycho, Jaws, and The Exorcist as one of the most famous – and greatest – in horror movie history.

The dystopian action thriller Escape From New York is another Carpenter classic, uniting the director with his greatest muse, Kurt Russell. The minimal synthesizer theme that tracks Snake Plissken’s journey across this ravaged vision of NYC is one of Carpenter’s defining works as a composer.

Assault on Precinct 13 was the first feature film Carpenter made after film school, and he made it partially as an urban reimagining of Rio Bravo, a film by his idol, Howard Hawks. Assault is a classic, not least of all because it has perhaps Carpenter’s best-loved theme. The theme’s main synthesizer line, partly inspired by the score to Dirty Harry and Led Zeppelin’s “Immigrant Song,” is catchy and dread-inducing in equal measure.

Carpenter’s theme for The Fog is one of his finest, and creepiest. The spooky synthesizer tone in Carpenter’s composition evokes the advance of the fog itself, helping to make this a quintessential horror score for a classic horror movie.

These 12" releases include the themes to Halloween b/w Escape From New York and Assault on Precinct 13 b/w The Fog, newly rerecorded by Carpenter and his Lost Themes bandmates. May it serve as a bridge between the Horror Master’s legendary, still relevant past and his remarkable present.

Each double A-sided 12' will be available in deluxe limited edition mylar mirrorboard sleeves and as picture discs.

Watch the live studio video for "Escape From New York" below, directed by Carpenter himself. It was filmed at The Village Recorder studio in Los Angeles and offers a preview of The Horror Master’s forthcoming historic debut live performances.

In the clip, he is accompanied by his son Cody Carpenter on synthesizer and his godson Daniel Davies on guitar, with John Spiker on bass, John Konesky on guitar and Scott Seiver on drums.

John Carpenter's US tour kicks off this month! Special blue and red vinyl editions of these 12"s will be available exclusively at the live performances. See full 2016 tour dates below.

19 US, Phoenix – Mesa Center for the Arts

15 US, Detroit - The Masonic Temple