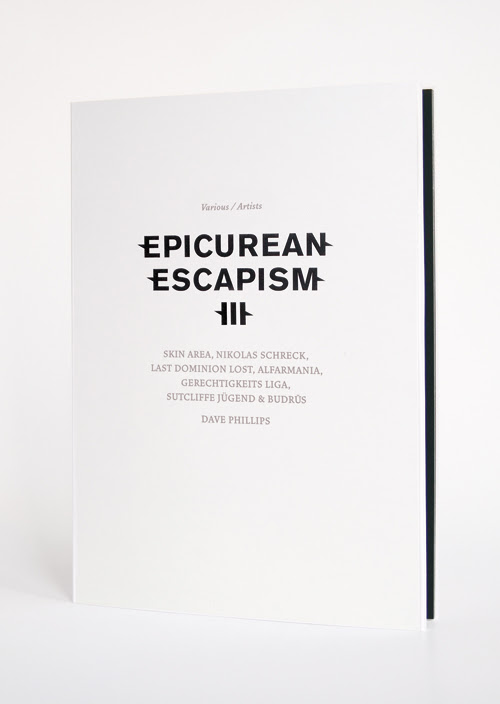 June 6th, 2006... is when the first Silken Tofu release saw the light of day. 'Sleep Paralysis' by Chromascope was just a simple hand stamped 3" CDr packaged in a cute mini DVD-case, but it marked the start of an intense journey throughout the contemporary experimental underground.

Today, exactly 10 years later, Silken Tofu is proud to announce its 60th release. The 3rd and final part of the 'Epicurean Escapism' series is again a small masterpiece curated by our closest Berlin connection, The Epicurean.

A manifesto of escapist longing, of taking things to a more extreme level, a quest for a complex contextual message: The third and final edition of the Epicurean Escapism compilation series again unites music, film and visual arts contributed by the most interesting acts in the field of experimental industrial music; exploring the viewpoint of escapism, sharing the vision of uncompromising utopian transgression, diving into this subjective counter-world. Enjoy and endure!

The CD starts with British veteran providers of the extreme, SUTCLIFFE JÜGEND, who present a straight forward power noise track with a pulsating electronic hook. Swedish units ALFARMANIA and SKIN AREA dig deep into the depraved consciousness, each of them with of their unique version of morbid industrial resonating with decay, while BUDRUS seduce the listener with beautifully melancholic Lithuanian poetry; German act GERECHTIGKEITS LIGA clank and rattle with their brand of organic industrial. NIKOLAS SCHRECK, the prominent voice of Radio Werewolf appears as a vaudevillian, with a perverse neo-psychedelic composition conveying allusions to the deity Lord Sutekh, merging European neoclassical with ethnic Indian music and poetry with an unmistakable Radio Werewolf accent. A very special treat also comes from LAST DOMINION LOST – one of the last recordings of John Murphy on drums can be heard on their ritual piece “To The Master, A Long Goodnight” dedicated to the master himself.

DAVE PHILLIPS uses sound as a means to activate primordial emotions otherwise hidden underneath the debris of civilization. His concept is called “Humanimalism” accordingly, meaning a state of mind that overcomes religious, material und supremacist charges of evolution, acknowledges itself as part of a whole and has grown into an empathic, conscious and connected creature allowing emotion and instinct their equal part in decision-making.

This collection presents his multifaceted work in composition, performance, psycho-acoustics, sonic rituals, voice, video, field recordings, objects and electronics, etc. in a yet unknown complexity and coherence of motion pictures. His performance work is revealed in all its undiluted brutality, the urgency and topicality of his work and his message is clearly evident, captivating and intensely documented.

Along with DAVE PHILLIPS’ video works created between 2014 and 2016, the DVD is a document of unique solo live actions and the notorious Paris 1996 performance of SCHIMPFLUCH-GRUPPE, as well as recent collaborations with G.X. JUPITTER LARSEN, and video artists PAKISE AKIN, JAN VAN HASSELT and REMOTE-CONTROL RECTUM, who in turn created their visual interpretations of PHILLIPS' audio works. It all amounts to a mind-expanding experience, playing with altered perception and throwing back the viewer onto his own vision.

The compilation package is topped off with a 24-page catalogue with a text about the work of DAVE PHILLIPS, as well as a double page each with collages, pictures, drawings and lyrics representing the audio work of every artist featured on the CD.