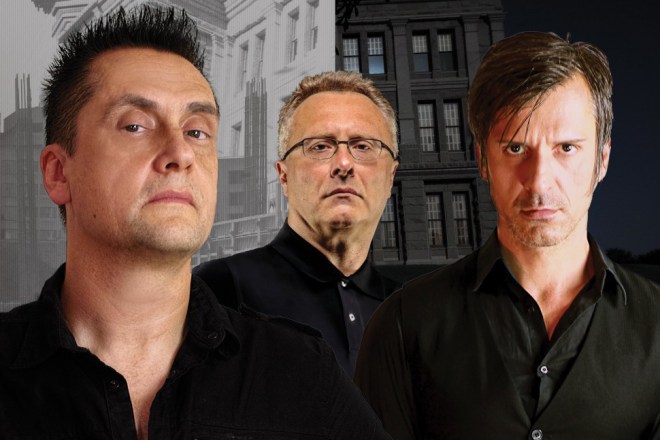 Critics worldwide hail them alongside KRAFTWERK and EINSTÜRZENDE NEUBAUTEN as pioneers of Electronic and Industrial music, bands like FRONT 242 and NITZER EBB called them their inspiration, and their musical ideas found their way into the sound of a wide spectrum of music, from DEPECHE MODE to the innovative pioneers of Detroit Techno.

Over 30 years and many internationally successful albums, DIE KRUPPS have developed an unmistakable signature sound that is meant to stay!

After monumental and industrial beginnings with the album ‘Stahlwerksinfonie’, the foundation for Electronic Body Music was laid by the single ‘Wahre Arbeit Wahrer Lohn’ (both Album and Single Of The Week in the British NME), and the following albums ‘Volle Kraft Voraus’ and ‘Entering The Arena’, which created international interest in the band’s characteristic synthesis of hard electronics and highly danceable beats.

European wide releases secured the band a large following, that was only set to increase in the ’90s.

After a 3-year break, international chart positions of a remake of their classic track ‘Wahre Arbeit’, now called ‘The Machineries Of Joy’, which was a collaboration with NITZER EBB (U.S. Billboard Dance Charts Top 10), marked the next chapter in the history of the band.

The following widening of their musical spectrum, which saw the addition of a more metal inspired aggressive vocal style and guitar riffs on the album ‘I’, and the essential single track ‘Metal Machine Music’, was like a slap in the face for conservative critics and listeners alike.

The mini album ‘A Tribute To Metallica’ underlined this daring step, gaining the attention of Lars Ulrich and Co., who helped to secure the band a deal in the U.S.

After an extended hiatus, 2013 was to become the year when DIE KRUPPS machinery went back into full swing.

The machines were greased, the dust shaken off, the factory gates opened again. After shift operation was restored, the long-awaited new prototype ‘The Machinists Of Joy’ rolled off the assembly line on 25.10.2013. With this most recent effort DIE KRUPPS seamlessly picked up the streak of their genre-defining releases in the ’80s and ’90s. DIE KRUPPS still deliver ‘Metal MACHINE Music’ – heavy, danceable, sometimes epic machine-music, adorned with well-placed guitar attacks and the ever-onward hammering of the ‘steel-o-phone’, paired with critical contemporary lyrics, setting themselves off from what has become the norm today.

On August 28th 2015, DIE KRUPPS returned with their new release ‘V – Metal Machine Music’. Back to the distinctly guitar-based sound from the late ’90s, the new songs showed a much increased level of aggressiveness! DIE KRUPPS had never before combined such heavy guitars and powerful sequencers. The upcoming shows proved that this direction was well reserved by the audience Europe-wide.

The album ‘V’ made the official sales chart in Germany and cracked the Top 40! The singles ‘Battle Extreme’ and ‘Kaltes Herz’ both made it to No.1 in the German DAC Charts, the latter stayed in the pole position for 6 consecutive weeks!