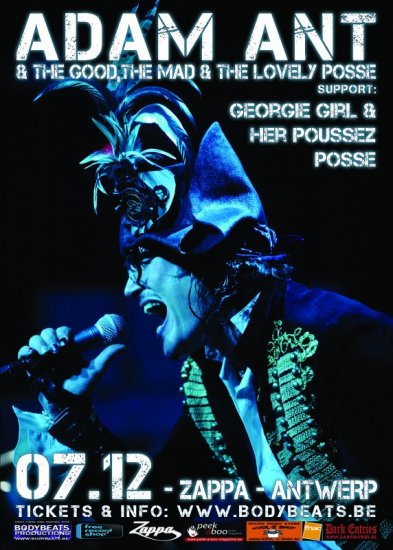 Adam Ant told me in the interview he gave one week before this show: "Live shows are the last bastion of human beings over machines and involve blood, sweat and tears". Well, he clearly demonstrated this point of view at the Zappa in Antwerp. Together with his band, Adam gave a 'total show'! And make no mistake, Adam has NOTHING to do with the new romantics... Adam is about ROCK'N ROLL. It's fun, heavy postpunk with glam and tribal accents. No fuckin' synths, that's for sure!

On the stage, they are no less than six musicians and it's a very SEXY gang: on backing vocals, you get the very hot Georgina Baillie, nicknamed Georgie Girl, from the girly band Georgie Girl and Her Poussez Posse, which supports Adam during this tour. Georgie Girl is a real magnet for the eye, especially for men, with her tight robes and latex suits... Mmmm.. Further you have guitarist Tom Edwards, of Fields of the Nephilim and Edwyn Collins, who gives a heavy rocky edge to the act, then a certain Joe on bass, and finally no less than two drummers! Andy Woodward and the beautiful Jola, who has the typical, gorgeous blonde percussionist look, a bit like Kourtney Klein.

And in the middle, Adam... Of course, he's no longer the stunningly beautiful young man he was 30 years ago, but I cant tell you that he still rocks like hell! He is dressed as a pop Napoleon with his black bicorn hat and his famous brocade military jacket. All through the show, he gives a lot of energy, singing and dancing, moving constantly.

Check this video, in which he introduces the band and plays "Antmusic":

It was a long time since Adam's first visit to Belgium, it was in Leopoldsburg and Ninove back in 1978! In the interview, Adam told me that when he could not get any gigs or appreciation from the British music press (NME, Sounds, Melody Maker), the Belgian fans welcomed him with open arms! Well, 34 years later, the fans are still there. Of course, the Zappa venue is not full but in the first rows, you have people who know all the songs by heart and dance and scream all the way...

You can hear that Adam's major influences are definitely not in the new-wave/80s area. His idols are Franck Sinatra, Elvis Presley, Roxy Music, Miles Davis, Brian Eno and of course T. Rex. In the encore, he covered "Get It On" in a masterly manner... As a whole, Adam played all the songs fans were longing to hear, plus a few rarities, and of course a few new songs like “Vince Taylor” or the new single, "Cool Zombie"! As Adam describes it, "Cool Zombie is a song based on a standard blues progression, with a lot of swamp style blues influence from the time when I was in Tennessee in the late '90's".

But the highlights of the show were undoubtedly the 'MTV hits' from Adam's repertoire, especially "Stand And Deliver", "Antmusic", "Goody Two Shoes" and "Prince Charming", which was played in the encore. As a whole, the Ant band gave an impressive and thrilling performance and it was damned great to see Adam Ant back with a killer show!

Stay tuned for Adam's upcoming album, "Blueblack Hussar in Marrying The Gunners Daughter”, due in January 2013. Here is Adam's description: "It has 17 tracks, with double gatefold vinyl sleeve and a special edition CD with booklet. It was made in a very traditional way, unlike anything I've done before. It was recorded in a very analogue / old school manner. At last, I have the next addition to my catalogue!"

Here is the video of the band as they performed "Stand And Deliver":

A big thank you to Borg and the Bodybeats team for the perfect organisation!

Next reviews
DAVID LYNCH • Eraserhead
DATE AT MIDNIGHT • No Love
AUDIENCE KILLERS • Footprints And Hearts
THE IMAGINARY SUITCASE • Here's to those we could not save
MUSHY • Breathless
• Playback
<1979> • FM Interface
LED ER EST, MUSHY AND MATTHEW DEAR • Review of the concert at Beursschouwburg in Brussels on 28 November 2012
SYNTHETICA • The End Of It All
POPOI SDIOH • Before And After Party