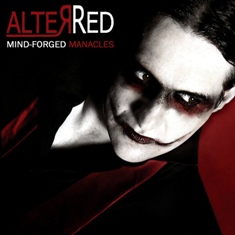 It has always been weird to see how dark sounds has been neglected in the UK and then especially by its press. The weeklies might have been hip (or still are, we really don’t know) but from the moment they saw a band who’s using mascara, it was more working like some red flag. Anyway, it’s not because you have some white painted face that's covered with red lipstick in Joker style that this makes you Goth, not even mentioning that it is a guarantee to be liked by the Goth magazines.

This band, Alter Red, formed in 2008. According to themselves, they make a very own mix from electronic beats and avant-garde-piano, topped off with powerful and soaring vocals. With a sound that’s been influenced by the likes of NIN, Depeche Mode but also glam stars like Bowie or IAMX, they have succeed in forming a fan base that consists of both Goths and indie fans. Something we definitely reckon.

When opener “Like April fools” was blasting out of our speakers, we thought we were dealing with the newest Apoptygma Berzerk but the more the record reaches its end, the more we had Jesus Jones in mind, if anyone remembers them! Songs like “The patient” show indeed the admiration Alter Red has for Bowie as this cabaret-like pop made us think of what The Thin White Duke was doing during his “Hunky Dory”-days.

“Mind forged manacles” is the debut of a band that already shared the stage with KMFDM, Rotersand, Assemblage 23, Straftanz and Combichrist.

It’s not an album that will immediately blow you away as for this both the songs and vocals are too weak but for those who like industrial glam pop (and especially pop): they will possibly like this.