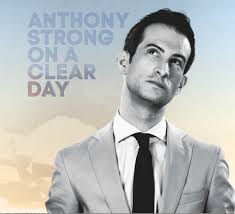 On A Clear Day

Yearning for the new Buble? Missing the boldness of Connick Jr.? Craving Cullum without the OTT showmanship? In complete contrast to Holly Herndon's challenging stratagem, we have crooning smoothie Strong whose oeuvre is a honey-glazed jazzy take on easy listening and soul standards. Big band arrangements with a slightly contemporary nod might not be top of your Christmas list but Strong does it well enough, even if it's all been done before. He's done well to get out of Croydon, garnering acclaim from Michael Parkinson and musical repping from Empirical's Tom Farmer (on bass) in the process. If there's one bug-bear, it's the re-arrangement of the timeless Unforgettable, transforming it from a magical ballad into a lukewarm bossa-nova parody doesn't impress. Nor does applying a similar blueprint to Don't Stop Till You Get Enough. Surprisingly, the big bold hepcat take on Bill Withers' superb Use Me isn't half bad.