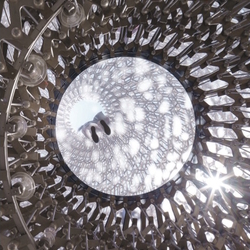 Back in the '80s, I had an insatiable appetite for hearing new music, new genres and anything off the wall. One port-of-call was the much-missed Wandsworth Road-based Recommended Records, a seriously left-field label and mail order company spearheaded by Chris Cutler that specialised in progressive avant-garde releases that defied the standard definition of avant-garde. Along with Touch Recordings, Recommended dished out some bewildering work that ranged from found-sound field recordings to brutalist, contemporary and cacophonous jazz that no-one would ever quote in a year-end list.

Fast forward to 2016 and the days of challenging, though-provoking music seem to have faded somewhat. Thank fuck-on-high for Caught by the River (and Touch, actually - they still exist). Rather than camp on their laurels, the team behind CBTR (Heavenly's Jeff Barrett for one) have grasped the candle and banged on with a swath of beautiful recordings that won't become anything other than documents, time-capsules, chapters of our time. This one just happens to be damn near perfect.

Commissioned for the 2015 Milan Expo for the UK Pavilion by artist Wolfgang Buttress, One is a four-part symphony created to highlight the plight of our honeybees. Recorded with an ensemble that includes Sigur Ros' string section, Jason Spaceman and Youth, One's key contributor also happens to include tens of thousands of our buzzing chums. Good luck with the publishing rights. With various equipment triggering sounds from within a hive (in Nottingham), the ensemble synchronised strings, lap steels, pianos (added later), harmonium and various electronica to produce something quite magical.

The Journey sets the tone with 19 minutes of gentle drone, string-driven accession and one gorgeous two minutes of melody right at the end, before blissfully drifting into the lilting Into. Now here is that rarest of pieces that sounds like other previously issued masterpieces for all the right reasons. Think Virginia Astley's From Gardens Where We Feel Secure, British Sea Power's From the Sea to the Land Beyond, The Blue Nile when they used to record instrumentals for b-sides and, now this leads us back to the Recommended reference earlier, Steve Moore's untouchable A Quiet Gathering. Utterly, utterly beautiful.

I'm not completely sold on The Hive - none of this music needs vocals, it all speaks for itself. But this is a minor quibble because Uplift flows into earshot as a lip-trembling curatin-call with another Eno-esque melody that might signify the end of days for all I care. Bewitching stuff.