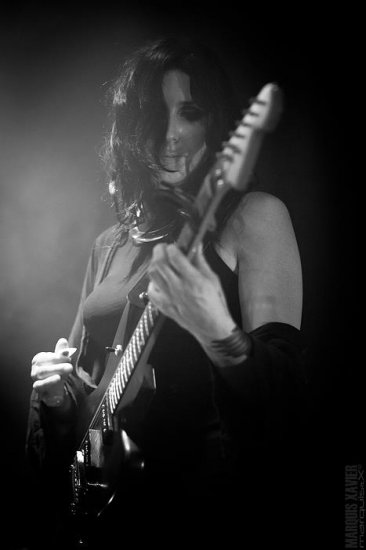 Review of the concert at the Trix in Antwerp on May 6th, 2013

Chelsea Wolfe is not Gothic, she's not into Witch-House or anything. She is a singer-songwriter of great talent who transcends the barriers of musical styles to create dark, profound and very personal songs. If you really want to describe her style, then it's a sort of drone-folk-blues-goth-electronic crossover... Hope it helps... I had already seen her on stage at the Magasin4 in Brussels in April 2012 and had been impressed by her show. But this year's show is even more promising, as Chelsea is to play a double set with an acoustic part, based on her widely acclaimed acoustic album "Unknown Rooms" and an electric part, with older songs but also unreleased songs from her forthcoming album, due in September.

After a great interview of Chelsea in the backstage area of the Trix, done together with my good friend Michael Thiel, from Weyrd Son Records, I had a nice chat with the other members of the band and went to the concert room (the small one upstairs at the Trix, not the main hall) to attend the show. The supporting band was Heirs, four guys from Australia who play a sort of instrumental, drone post-metal / post-rock music. They have already released two albums and one EP on Denovali Records and later this year, they will release a third album. Their concert was powerful, dark and hypnotic. It's not really my favorite type of music: it's too repetitive and I get quickly bored when there's no vocalist. They played "Hunter", the title track of their EP and also two new, yet unreleased songs: "Evol" and "Two". Anyway, a nice discovery, and moreover they are really nice guys when you get to know them! Watch an excerpt from their show below:

Before Chelsea Wolfe took the stage, there was a tape playing the dark and lyrical music of the Polish composer Henryk Górecki. Then Chelsea Wolfe appeared, dressed in a long black, witchy dress. She took her acoustic guitar and started playing "Appalachia", from "Unknown Room". Suddenly there was a complete silence in the public. A quasi religious atmosphere. The beautiful Andrea Calderon accompanied Chelsea with violin and backing vocals and Ben Chisholm, Chelsea's partner, with synth bass and sound effects. A great moment. On "Spinning Centers" and "I Die With You", the vocal harmonies between Chelsea and Andrea were really wonderful and the atmosphere was that of a dark ceremony, with very few lights and white candles on the stage. Then it was "Flatlands", probably her most classical folk song.The last track of the acoustic set was "Boyfriend", a song composed by an old friend of hers, Karlos Rene Ayala. It's a very slow and ceremonial song, with a low-pitched guitar (Chelsea's guitars are always tuned one tone lower, in D) and nice organ and synth arpeggio's at the end. When Chelsea left the stage for the first time, we were like in a dream, hypnotized. A perfect and very touching acoustic set! Watch them perform "Flatlands" below:

To make the bridge with the electric set, Andrea Calderon played a very nice instrumental on the violin. The octaver effect gave the impression that two violins were playing. Andrea, who plays in a prog band (Corima), is a great fan of Magma but also of the Belgian band Univers Zero and backstage, she told me that her instrumental was inspired by the track "Straight Edge" by this prog band. A great moment.

Then Chelsea came back for the electric set, together with Ben, the drummer, Dylan Fujioka and the lead guitarist, Kevin Dockter. They started the set with a brand new song, "Kings", which will appear on the forthcoming album. It's more electronic, nearly trip-hop(ish). You think of a gothic Portishead style, hypnotic and very dark, with cascading minor chords that take you very far. You can see that Chelsea likes to play this new song because she is moving her head and body, her eyes rolling like in a trance. Ben leaves his keyboards and grabs his Rickenbacker bass for a noisy, nearly prog-metal instrumental ending. A masterpiece! I definitely want this song for my next DJ set...

After this, the band played a few 'classics' like the terrifying "Demons", the bluesy "Moses" and the mesmerizing "Tracks (Tall Bodies)". "Movie Screen" was again a real 'tour de force' on vocals. With her loop foot pedals, Chelsea manages amazing vocal effects on this song. The synth bass and slow drum beat strengthen the trip-hop(ish) atmosphere... After that, they played another unreleased song, "Feral Love", which starts with nice synth sounds and an amazing drum pattern on the low tom by Dylan Fujioka. The last song was a very powerful version of "Pale On Pale". After the organ intro, Chelsea played the bluesy riff which has now become a sort of classic, and started singing this beautiful and plaintive melody with arabic overtones that are somehow reminiscent of Lisa Gerrard. The end of the song was a noisy, free style wall of sound that lasted for more than two minutes, until Ben raised the hand with authority to put an end to the show.

For the encore, they came back to play "Echo", their cover of the Rudimentary Peni song. The guitar intro evoked again Dead Can Dance, more precisely the intro of "Cantara" and here again, Chelsea's enchanting voice gave us shivers down our spine until the band left for good, leaving us wanting for more.

For me, it was clearly one of the best concerts I've ever seen and it will surely rank among the 5 best concerts of 2013. Chelsea Wolfe and her band have pushed their craft even further towards perfection, creating a sum of (nearly) everything that I love in music: depth, power, inspiration and soul. It's like a kaleidoscope with blues, folk, metal, drone, trip-hop, dark folk, classical, rock, all this combined with coherence and authenticity. Can't wait for the new album, which promises to be yet another masterpiece. Thank you, Chelsea, Ben, and all your friends, for making such a wonderful music...

Read the interview of Chelsea Wolfe, done before the show here.