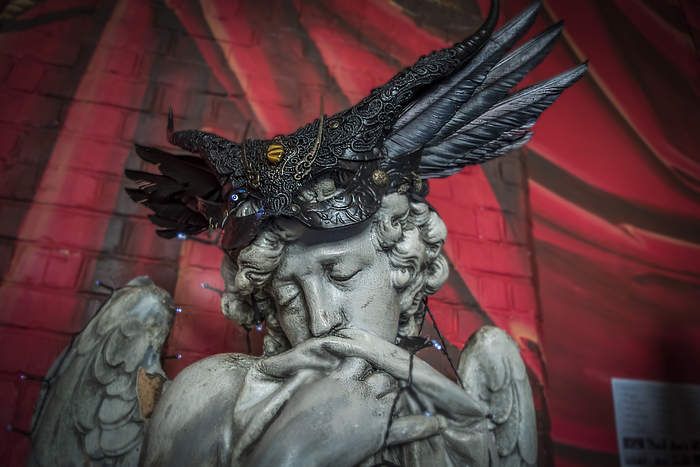 There are some festivals in this world, which are about more than music. If you do not believe me - visit Coalescaremonium.

Imagine an event where your favourite music gigs are combined with new unexpected music experiences, where you get the feeling of being among friends, even if you come alone, where everyone takes their freedom to express themselves whilst maintaining mutual respect. It is more than music because you will not see just see bored visitors standing in a hall with a cup of beer and just waiting for the bands change.

At Coalescaremoniousm everyone is welcomed to take part in a big common ritual.

The venue “Bouche a l'Oreille” is an old convent, which has been transformed into a two floor conference room, with an entrance hall and a garden. The posh and exclusive cabaret style embelishement of the place was perfectly fitting the event.

Two main stages were reserved for live concerts. The first one was a big theatre hall with a complimentary round pentagram stage, connected to the main stage by the bridge. It was used for more gothic/pagan concerts.

The second principal stage was a bit smaller, situated in the chapel of the convent, and embraced EBM and electro gigs.

An additional half opened pavilion had been transformed into a giant disco, where the acclaimed DJs changed to entertain the dancing crowd. The place was dark enough to maintain the disco fog and the beaming lasers, yet open enough to breathe the fresh air and welcome new visitors.

The market hall consisted of various shopping stands with peculiar jewellery, artful fashion as well as a Wool-E CD shop. A free wardrobe and professional photography corner was provided for the visitors. The funky baroque lounge room served home made cakes and tea and the garden on the top embodied a little food court.

The opening band Hybryds had one of the best show concepts that evening. Their way of performing, involving musicians and dancers, the theme of the show was simply hypnotising and well developed. The music was ritualistic, ethnic and industrial at the same time. The band has a long tradition going back to the mid 80s and surprised us with good experimental pagan electro.

DaGeist surprised us with their cordial and romantic dark electro. The French coldwave musicians have proved, that melancholic tunes can be yet energetic enough to make you dance. The concert goers stayed under their spell from the beginning to the end of the live act. The culmination of the performance? Surely the song “Vampire” which brought some good vibrant vibes.

Inkubus Sukkubus is a legendary British band you should know even if you are not a frequent goth festival visitors. A little heart given for the very high level of professionalism of their performance. The gig was truly dynamic and exciting, dark 80s in mood, atmospheric and captivating. Their cover of the "Rolling Stones" Paint it Black moved the crowd.

Mirexxx was surely the most anarchist band performing at Coalescaremonium. Although the style is described as EBM there has been a hint of cyberpunk interlaced into their music. By the way, most of the songs sounded somewhat softer than expected from the record. The performance was fast, aggressive, fresh and captivating. There was surely some surprising cognitive dissonance between the act itself and the place of performance (chapel).

Dordeduh is a Romanian pagan metal band, which deserves adoration because of the contrast of their performance. The hard and heavy passages were changed with melodic and folk instruments. The opening of the live act with a folk horn surprised everyone. The sound of the band is very deep and mature and anything but superficial.

When I saw the poster for a German band, Feline and the Strange, in the main hall I was expecting a more cabaret style. As it turned out the performance was darker and more electronic, floating between an electro and steampunk experience. The singer's vocals were very special and really stood out. Not only because Feline is a real opera singer but also due to her vibrant performance which began rather mild and sombre.

Empusae offered us a dark meditative experience, combined with visual image projections. Voyage trance for the body and soul, where you had rather to experience and feel, than try to understand with your mind and to follow. A little heart given for weirdness factor. By the way anyone that missed them will be able to see them at WGT this June.

The fashion show needs a special mention. It was surely the culmination of the evening. Now if I were to describe every outfit that would be very difficult for everyone - so take a look at the pictures and let yourself be inspired. The show was put together from various mini performances each involving its own kind of music and two models, letting us to submerge different mood.

During the whole festival you had the feeling of being invited to a ball at a mansion. Everyone was welcomed. It was also possible to circulate freely, take pictures and, last but not least, to talk to the musicians. The exquisite costumes of the visitors - grandiose, magic, horrific and sometimes a bit freaky supported the participants in creation of the unique ambiance.

Finally I will allow myself to mention some curious observations. First, there were a lot of people taking pictures at the concerts (the outcome of visitor friendly policies made by the organisers).

Second, the weather was so good for Brussels, that someone launched a thunderstorm sound in the main hall.

The concerts ended well beyond midnight - the guests and the musicians stayed to dance until the morning and left home together with good memories, new acquaintances and a lot of good pictures to share.