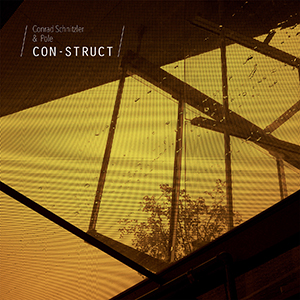 The late Conrad Schnitzler's contributions to electronica included producing a Tangerine Dream album that inspired a certain Stefan Betke and his band Pole to 'go electronic'. The influence on Betke's nom-de-plume has continued unabated for the best part of three decades with Pole now firmly ensconsed in electronica legend with numerous left-field and off-kilter releases.

It is fitting therefore that leading boutique electronica imprint Bureau B and the Con-Struct project co-ordinator Jens Struver have invited Pole to construct new compositions (not remix) using Schnitzler's original archived material. After previous explorative instalments from the likes of Pyrolator and SchneiderTM, atmospheric minimalism is the order of the day with Pole. The beats are just slightly left of centre and not too obscure, the melodies are barely audible if at all but the results are impactful, making this episode the most contemporary without losing sight of Schnitzler's technical attention to detail.

The tracks flow together seamlessly before arriving at the daddy of them all, the closing 11-minuter Wigenlied Für Katzen which slowly unravels revealing a haunting underbelly of tension and portent.