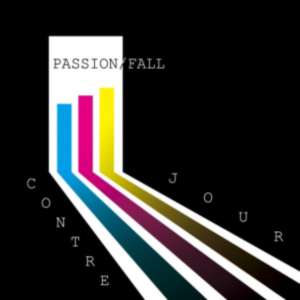 People who are keen on coldwave will certainly be familiar with the French label Infrastition as they re-releases on a regular base rare gems from French (forgotten) bands. But they’re not only in love with the past, they also have an eye for new talent. Contre Jour for example!

This band from the sunny Nice started in 2009. After having released one EP (Neptune) and their debut album One Night At The Station (also released on Infrastition), the trio proudly present their second album Passion/Fall.

There are many reasons to fall in love with this band. Be it the sexy voice from Roxy, Manu’s dreamy guitars or Christofs moody keyboards, there’s always something that will attract you to their sound

It is not that easy to find the right description for this album that features fourteen excellent songs. At times you’ll hear the gorgeous post-punksound Cocteau Twins used to have during their Head Over Heels-days. Or even a Slowdive-touch and at other times it’s even coldwave.

Contre Jour definitely found the right balance between pop and atmospheric sounds. I mean, somewhere it feels like every song is created to sing along. It’s obvious that these youngsters (cos that’s what they are!) took their inspiration from the 80’s, just listen to a song like 85 and you know enough. The influences can be heard at once, but they make it their own.

Perhaps they live in the past, but Passion/Fall is a splendid album that despite its fresh date has the sound of a coldwave-classic. The second album by Contre Jour is one of the first highlights of the year. Watch out for an interview with Roxy, Christoph and Manu on these pages. Obligatory stuff!