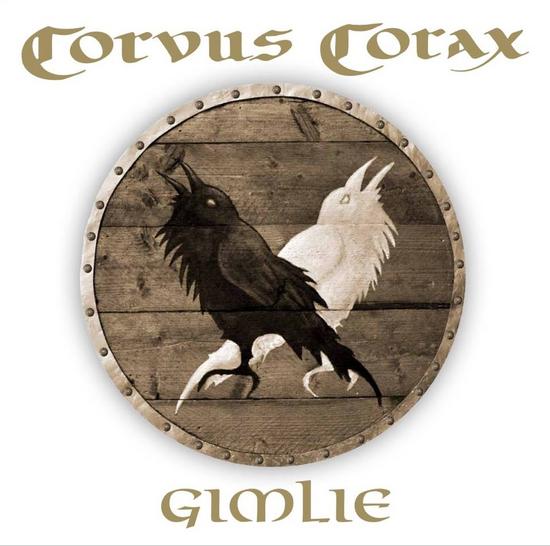 Corvus Corax will play at the legendary Trolls et Légendes Festival in Mons (Belgium) and can celebrate as it's their 25th anniversary. Gimlie is their latest album and will for sure figure in their live set.

From the mysterious and very catchy intro Die Seherin with clearly a neo medieval sound (bagpipes included) until the very last track Twilight of the Thunder God (Hymnus) you are captivated by their rich and well worked out sound. The variety in the tracks is also very appealing: from soft and mystical into a more party mood with wild mood swings! Corvus Corax has proven to be one of those living legends of Neo medieval music. Another nice thing is that they make their own instruments, try to keep as much as they can within the band and not to depend on others, making them non-mainstream but thus very interesting!

‘Gimlie’ starts with the deep voice of Castus, followed by the rest of the band. Great drum beat and horns call on the feeling of a battle. I deeply love the harmonic sound of the voices, the percussion and the bagpipes. ‘Unicornis’, has a text written by Julius Ceasar, and is sung in Latin with – again - beautiful harmonic voices. The uptempo feel is great and is not disturbed by the almost sacred male chant (makes me think of monks having a private party). The combination of the bagpipes with the flute works just perfect. ‘Der Schrei’ is a Gaelic song with a very catchy sound, not to be confused with the famous painting. ‘Koeniginnen werden ihr neiden’ is yet another Gaelic song with an Irish pub feeling in the sound (must be happy hour). The chorus is very catchy too. ‘Derdriu’ takes you deeper into the Gaelic world with a fast drive! It sounds wild if on a party. I absolutely adore the warm festive sound! Check out the video too!

Beowulf, an Anglo Saxon poem (yeah, not the movie), is the center of the next song called ‘Grendel’ (don’t mix it up with the next song). It is sung in a creepy and very dark way, very scary but it luckily gets this kind of singing monk sound. Next is ‘Beowulf is min nama’, sung in old English. The storytelling is so real, it feels as if you are in the middle of this scary story. ‘Sigeléasne sang’ is another song from the Beowulf saga and has an even bigger dramatic feel (for sure as it is more narrated than really sung). It’s a slow song, so I can imagine that some fans might skip it, other will love it for the great feel and more party sound towards the end (thanks to the flute and the percussion). A more Irish minded sound (due to the great flute intro) comes along with ‘Crenaid Brain’. Party time, for sure with this one and yes the lyrics are also appealing to the band’s name. The fiddle is played by Robert Beckman of The Inchtaboktables (worth checking them out).

‘Twilight of the Thundergod’ is a cover song of Amon Amarth. It’s the first time ever that they recorded a cover! It just sounds amazing! Check out the original and notice the huge difference between both versions! Can’t wait to hear this one being performed on stage as I feel it’s going to be a big party time! Great percussions with this one! The harp in the beginning is simply mesmerizing, just as the female voice and the medieval feel. This track might be used during one of the Vikings series. I’m simply bewitched by the great vocals (it sometimes sounds like The Breath of Life but in a complete other context). ‘Krummavisur’ is for sure a keeper!

Last song is the bonus track ‘Twilight of the Thunder God (Hymnus)’, no vocals on this one. It sounds like slowly digging a grave and saying goodbye. A sad end for a great album! Can’t wait to see them on stage (again)!