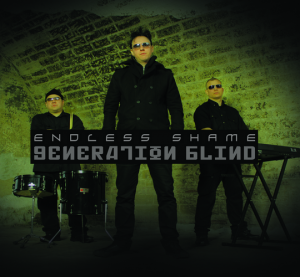 A really interesting label to follow right now is the Italian-based Elektro Kommando. Soon they will release the new album by our own Liquid G. but as they’re open-minded over there, they release everything (as long as it has electronic beats and some good sound) and with Endless Shame they have synthpop under their wings.

This trio consists of singer Mattias Levin along with Anders Olsson and Mika Rossi. They’re not exactly newcomers as their debut album “Price Of Devotion” was released in 2007 and was soon followed up by their second studio album “Unspoken Words”.

It seems like this trio are really busy bees as their third is now in the shops and it contains synthpop which is been influenced by great 80’s acts like Heaven 17 or John Foxx, just listen to opener “Painkiller” and it feels like we’re back in 1985.

The special thing about Endless Shame is that their synthpop has a sort of indiepop feel. We frequently thought of Brian Molko when we heard Mattias sing, which is a definite bonus if you want to reach a wider audience.

Apart from the rather stupid Enigmatic-version of “The reaper” this album hosts quality synthpop that fans from bands like The Echoing Green or Iris will certainly like.