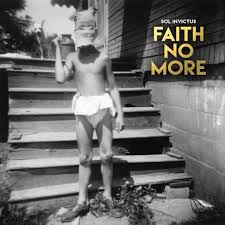 It is (already) 18 years ago that FAITH NO MORE released its last studio album “Album Of The Year”. It is unbelievably long ago and it feels strange because of the fact that the music of FAITH NO MORE still feels so present nowadays. For those who do not know, FAITH NO MORE influenced a lot of crossover (rock, funk, pop, metal, jazz and easy listening) bands.

“Sol Invictus” shows that the reunion is not for the money, but for creating music. Although the music does not sound as ‘epic’ as their earlier work, the way the band combines all different styles again into one is truly incredible. This album contains the last recording line-up with Mike Patton, Bill Gould, Mike Bordin, Roddy Bottum and John Hudson. On “Sol Invictus” it is again impossible to pinpoint the music into one style. The quiet start with the title track is followed by the bombastic typical FNM single material of ‘Superhero’ (listen to the typical piano sound and the furious guitar work for instance). ‘Sunny Side Up’ is a song that builds up in a soft-heavy-soft-heavy way we know so well. The impressive drum rhythm during the tension filled ‘Separation Anxiety’ is followed by the laidback start of ‘Cone Of Shane’ (which ends a lot heavier).

The uplifting samba, cha-cha mixed into an impressive alternative rock song ‘Rise Of The Fall’, the spoken word meets handclaps on the western influenced ‘Black Friday’, the hilarious ’Motherfucker’, the impressively built song ‘Matador’ and the laidback ‘From The Dead’ proves that the multi talented FAITH NO MORE is back. On top of this all is the unbelievable flexible voice of Mike Patton. He croons, sings (low and high), screams and talks, always filled with a certain soul. The music of FAITH NO MORE is not as frantic as it once was, but ‘Sol Invictus’ is their most mature and constant album so far. That is a huge achievement if you know their earlier material.

Same genre: CROSSOVER
THIS CAN HURT • Worlds Apart
PRO-PAIN • The Truth Hurts
COMBICHRIST • This Is Where Death Begins
LA HORDE • Dystopie
SKINDRED • Volume
MISCHIEF BREW • This is Not For Children
MORGLBL • Tea Time For Pünks
WAITING FOR • The Hexen