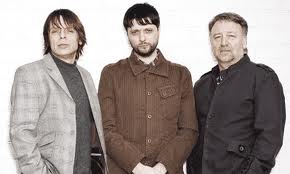 You Don't Know This About Me (Outernationale Remix)

Roughly five years ago, three (in)famous bassists (Mani, Peter Hook and Andy Rourke) formed the short-lived Freebass. So short-lived in fact that within the time it takes to boil the kettle, they'd split up again just prior to their one-and-only album got its release. It was a bit of a stinker in places and needed a decent producer to steer the trio in the right direction. Somewhat late Outernationale, aka producer Derek Miller, has knocked out a vast improvement on a track that appeared on the band's Two World's Collide EP. Featuring Tim Burgess on vocals, Outernationale's take involves a thumping big beat, some neat melody changes and a comparatively more memorable hook than the original ever had. Issued on Soundcloud.