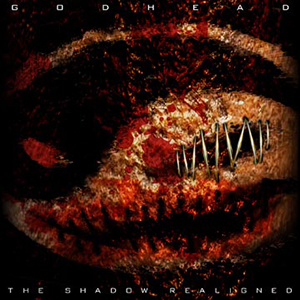 The industrial rock band GODHEAD became more known with their third album “2000 Years Of Human Error”, especially due to the help from Marilyn Manson, Twiggy Ramirez and Daisy Berkowitz on the title song. After that the band released albums until 2008, but it never created much fuss in Europe. In the States apparently the single ‘Trapped In Your Lies’ from “The Shadow Line” (2006) got in the rock radio top 40. With “The Shadow Realigned” GODHEAD returns with an album filled with 14 remixes from 14 different producers. Like most remix albums this album suffers from the different approaches. A lot of the songs lack a (real) soul and emotion. It’s an understatement of the status of Godhead.
A good band, but not a band that offers something really special. At least, not for a whole album. Like always with this band, some songs sound pretty special, but most of the songs are OK and nothing more. With “The Shadow Realigned” you’ll have to wait until the seventh song to get what you expect. ‘Goodbye’ is a mix of tension, experiment and still as easy to the ears as their greatest songs so far. ‘Another Day’ sounds musically very interesting, but this time the voice of Jason Miller (who normally proves to be a great singer) lets the song down. After that songs like the dance inspired version of ‘Once Before’, the ‘do I hear an industrial rock Muse?’ of ’Your End Of Days’, the Depeche Mode oriented lovely ‘Fall Down’, the typical Godhead ‘Unrequited’ and the Alice In Chains-like ‘To Heal’ prove that GODHEAD has (still) potential. The covers from Depeche Mode, ‘Never Let Me Down’) and Kiss's ‘God Of Thunder’ in the end prove that Depeche Mode (currently) is musically closer to GODHEAD than Kiss.