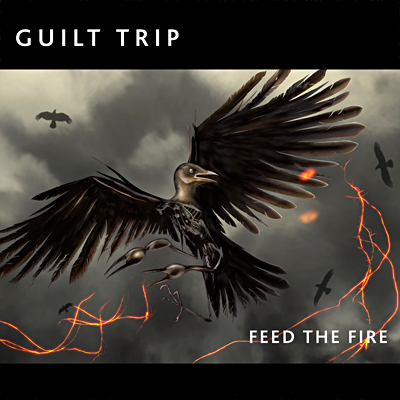 Skinny Puppy has been a major influence on a host of bands for many years now. While they are in the spotlight again with their new album, the swedish band Guilt Trip have just released their debut "Feed The Fire". As you can expect, they sound similar too the 'puppies', but don't expect a clone!

The first three songs are still in the puppy vein and they make a good effort, with catchy and compelling body-movers. Then it fades a bit, especially "Unite", it never catches my attention and is quickly forgotten. "Reset" is a killer song with a dark atmosphere around it. "Life Spit Love" has different vocoded vocals and sounds harsher, it's good to hear a change in vocals because there's not that much happening there.

The Skinny Puppy adoration reaches it's high with "Braptism", aptly named and just like "Unite" very dark and haunting! Did you know their own label is called "By Revolting Art Productions"? And what do the first letters form? Right! The last song has some punk attitude with lyrics like 'This is my life, this is my lie...'

Some more name-dropping needed? NTRSN is a reference and I also hear some club sound hints, like last year's Combichrist album "Making Monsters". Pretty good for a debut (they also have two demo albums according to their website) but they do need to add some more Guilt Trip to their music. Been there, heard it all before, it's not that far away...