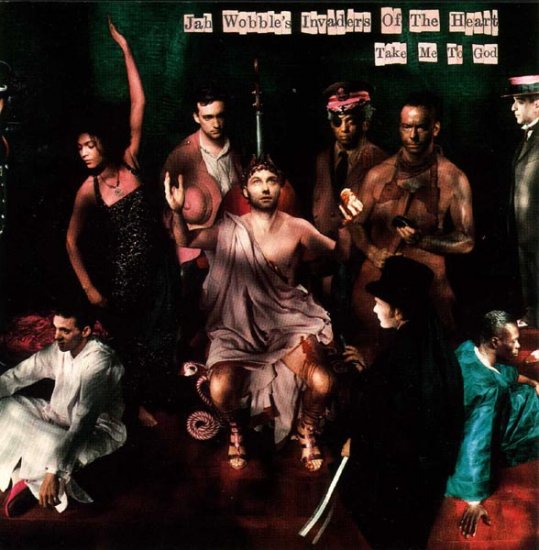 JAH WOBBLE'S INVADERS OF THE HEART

Take me to God

If they ever ask you to name the most influential bass-player in the world, it will be rather hard deciding on Peter Hook or Jah Wobble.

According to the legend of things, Jah (born as John Joseph Wardle) and was once of the famous list of people that should replace Glen Matlock but it would only be in 1978 that he would join John Lydon, becoming bassist of PIL.

Not the easiest of years as alcohol ruled Jah back then, but the Londoner was gifted enough to give this world two albums that would be enormously influential. There are even lots of music lovers who dare to claim, PIL's second album "Metal Box", as one of the best albums ever.


However, the romance was rather short and Wobble soon left PIL. He teamed up with notorious musicians such as Can-legend Holger Czukay to front The Human Condition but it would only be from 1983 on, that his solo career would launch him, by fronting the legendary Jah Wobble & The Invaders From The Heart.

Jah might be famous for his new wave classic “How Much Are They?” but as soon as the 90’s arrived, he teamed up with some great chart superstars like Sinead O’Connor.

“Take me to God” was released in 1994 and it’s still the most successful album in his career and you can be sure that the collaboration from Dolores O’Riordan from The Cranberries has a lot to do with that as back then everything she touched turned to gold.

Anyway, it would be unfair to judge this album only on the basis of some nice forgotten hits from the 90’s. As you can hear perfectly in tracks like “I’m an Algerian”, “Whiskey Priests” or “Yoga Of The Nightclub” Jah's direction was getting quite good.

Some years later Jah would turn totally his back against his past to concentrate himself on his 30 Hertz-label that is famous for its Chinese dub.

On this reissue you get a bonus disc containing 16 tracks which were then recorded but never made it onto the hit album and lovers from dubreggae will lick their fingers as you’ll find plenty of gems here.

“Take me to God” was of course never the best album Wobble made and it never will be but this Cherry Red reissue also puts an album in the spotlight that is more than just some album from the 90’s.

Okay, that Dolores-duet can always be skipped not that I will do that!