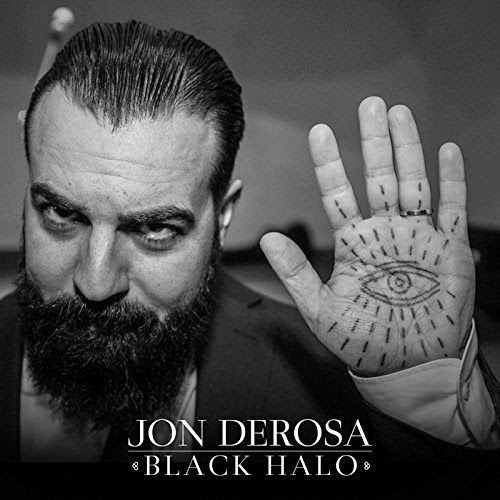 The L.A.-based crooner's last album A Wolf In Preacher's Clothes became a bit of a favourite in these quarters, not least for its creator's Richard Hawley-esque balladeering and Orbison/Fury-style atmospherics. For Black Halo, DeRosa may well have changed cities (previously based in Brooklyn) and applied facial furniture to rival John Grant but his ethos is still the same - classic swoon-some alt-pop with a retro '50s/'60s bent.

The opening pair of Fools Razor and The Sun Is Crying kind of sings it all - the former offers us a romantic teen-beat shangri-la that evokes scenes of open-air cinemas, wind-ravaged dustbowl towns and the obligatory convertible driving into the distance, complete with desired partner cooing into the driver's ear, soda in one hand, gun in the other. The latter is a musical-box weepie that tears at the heartstrings as much as it does the tear-ducts, in fact any more of this sort of thing and I'll have to buy shares in Kleenex.

Thankfully, DeRosa withstands the temptation to rewrite the same riffs over and over and gives us new single Coyotes with its unintentional melodic nod to La Vie En Rose and the dainty Dancing in a Dream, topped off with some beguiling vocals from one Carina Round. There's also a co-write with Stephin Merritt (When Daddy Took The Tree House Down) and the brassy romp You're Still Haunting Me.

All of which adds up to Black Halo being the perfect foil for DeRosa's honeyed baritone, and an ear for a traffic-stopping melody. He's done himself proud with this one.