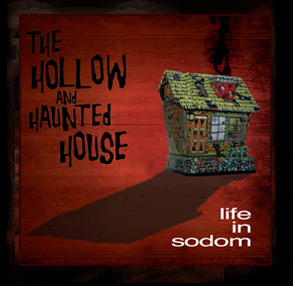 The Hollow and Haunted House EP

Dedicated gothrock fans probably have bought (ages ago) those well respected "Hex Files" compilations. If so, you must re-check the second volume as there you'll find Life In Sodom.

This American gothrock band always continued to do their own thing which led them to classy albums like "Charader" and the very fine "Alone", that was released two years ago.

Once I claimed that the voice of singer Gerrie Brand is quite similar to the one from Veljanov and I still say this. No wonder then that this band makes moody darkwavepop and that's what they're doing on their newest EP as well, which promises a lot for a new forthcoming album. Sole letdown on this EP is that you'll be confronted with one song, albeit in three different versions.

"The Hollow and Haunted House" is indeed the kind of gothpop that can be connected with the later Nick Cave sound and therefore seen as brilliant. But three versions is just a bit too much, especially as one is an instrumental version and the other version a bit too much of an A cappella version.

So we'll keep it to another brilliant song from an underrated band but we really need more variation guys!

Same combination of genres: DARK POP + GOTHIC
LEBANON HANOVER • Tomb For Two
FLESH & FELL •
THE BEAUTY OF GEMINA • The Myrrh Sessions
RED TEMPLE SPIRITS • Dancing to restore an eclipsed moon/ If tomorrow I were leaving for Lhasa, I wouldn't stay a minute more...
BLACK ICE • Before the first light
VIC ANSELMO • In My Fragile
EXIT TO EDEN • From The Other Side
THE WOLF GANG • First Blood EP
DEAD GUITARS • Stranger