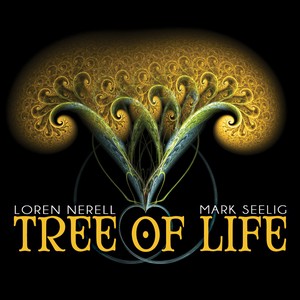 A lot of bands nowadays got their inspiration from the middle-east, but LOREN NERELL and MARK SEELIG are travelling further east. The spiritual music and the chants are mostly inspired from South-East Asia. It’s especially from Bali and, mainly, India. The music is a mix between new age, world music and spiritual soundscapes.
When the album, steadily, progresses the Asian influences seem to decline. The album transforms slowly in a more traditional meditative new age album. Especially the first three tracks are however really amazing. The use of South-East Asian influences (the chants and the music instruments) make these songs special. All songs know a slow built up (the shortest song clocks 7:58 minutes, the longest 19:57 minutes), but the first three tracks got that little extra.
Like the use of a hypnotic rhythm, the chants or, sometimes on the background, a, for us, mysterious sound of an Asian music instrument. It’s a shame they can’t keep the same quality a whole record long (‘Kayon’ for instance is too boring). If you like Wardruna don’t get confused by a title like ‘Yggdrasil’, because the version on this album is (literally) miles away from the version of the North.