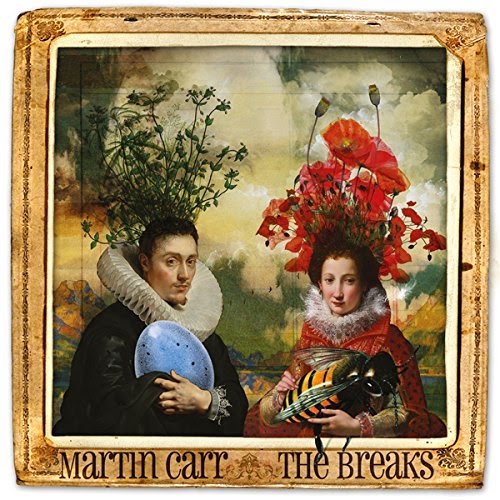 Written during the course of fatherhood in recent years, Martin Carr's second solo album proper builds on where his debut left off, coats it all in honeyed songs about skyways, saints and mountains and makes staring out of the window at life going by an art-form.

Suffice to say that Carr has got it, 'it' being familiar and reliable songwriting chops straight out of Brit-pop and surf-rock, a little less Boo Radleys than you might imagine but very much part of the ever-growing Tapete roster that currently includes Bill Pritchard and Lloyd Cole. Mildly psychedelic, often hum-along, The Breaks has, by turns, a swelling and confident positivity and a nonchalant shrug about its lyrics - one minute there are a string of sha-la-la-las going on during Senseless Apprentice, the next we've got the 'yeah whatever' resignation of the title-track with "...if the breaks don't come, we'll just get by without them...". You can almost hear Carr getting older with every line, but in a contented way (clearly, the hedonism of yore has been replaced with family values).

There are many highlights - current single The Santa Fe Skyway is an enjoyable indie-pop romp, St Peter In Chains becomes the clenched chorus-filled fist of the album and the sublime I Don't Think I'll Make It is like a melodic tickle under the chin, a melodrama portraying unrequited desire that recalls Neil Hannon or Richard Hawley in tone. Hits, all.

Next single Mainstream and the epic Mountains are also rather moreish and I'll wager that most purchasers of this album will revisit at least seven of these finely tailored tunes on a regular basis. This Carr has plenty of mileage left in him.