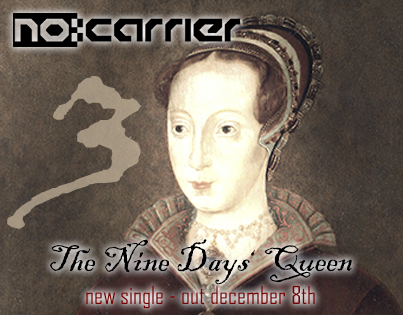 As everyone can imagine our office daily got bombed with mails from bands who are proposing their newest material. The sad truth is that (however we would want this) we can’t review everything as God decided a day only has 24 hours. But we found time for this one and let's be thankful as this is great!
The new digital single by No:Carrier is about Lady Jane Grey, who became the Queen of England for nine days before being dethroned by the real successor of King Edward VI.
No:Carrier describes their music as dark Electro Noire Pop. According to themselves they’ve already been compared to Kirlian Camera, and I guess I would have done the same. The music is electronic, dark and cold at the same time, danceable and as a bonus there’s the great voice from female singer Cynthia.

This digital single which you can hear here is a nice teaser for their upcoming album “Wisdom & Failure” which will be released in May 2014.

Same combination of genres: DARKWAVE + ETHEREAL / HEAVENLY VOICES
ANDERS MANGA • Perfectly Stranger
LES JUMEAUX DISCORDANTS • Les Chimères
SOAP & SKIN • Sugarbread EP
THE BREATH OF LIFE • Review of the concert at the BIM Fest in Antwerp on 15 December 2012
DEAD CAN DANCE • The Renaissance of Dead Can Dance - Review of the concert at Cirque Royal on 29 September
COLLECTION D'ARNELL-ANDRÉA • Concert at Magasin4 in Brussels on 12th May 2012 with A Challenge of Honour and Skeptical Minds