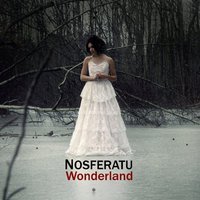 Some bands never seem to disappear and luckily enough the band around Damien Deville aka Nosferatu belongs to this category. Although, as fan of this band you must be quite patient.

Some compilations aside,  “Wonderland” is the first cd since “Reflections through a darker glass” came out and that’s quite some time ago!

Last year those Brits were one of the featuring bands at the Gothic Festival at Waregem where they were promoting their latest single  “Black hole”. And now, one year later, the full album, including “Black Hole”, is a fact.

From Nosferatu you better expect no new sound but in their case that’s just a good thing, since there aren’t that many goth bands around these days who are coming up with the traditional goth sound.

Nosferatu know very well that the best thing you can do is making your best song as opening track, so once “Horror Holiday” comes out of your speakers, you tend to think that “Wonderland” will be the ultimate goth classic. As soon as the album is reaching its end, we know it isn’t but without any doubt an album that’s been worth your attention..

Nosferatu was never the band who made it themselves easy, never did they deliver  well shaped goth songs as they always liked to wrap it up in some psychedelic atmosphere which can be heard on  “Jackal”.

Having said that, it’s a Gothsend that songs like  “Silver” or “Bombers” are having that typical goth touch from the 80’s. Or what about title track “Wonderland” which is a wonderful ballad at where a melancholic piano sound is dominating the sound.

In fact: apart from the dreadful Ramones-cover “Somebody put something in my drink” there isn’t any bad track to be found on here and that’s more than a rare thing these days!

An absolute must for people who sold their soul to goth rock!